Lions' Ryan Broyles waits and wonders from the sideline

Sunday, he was inactive for the third week in a row and sixth time in 11 games this season

Lions' Ryan Broyles waits and wonders from the sideline 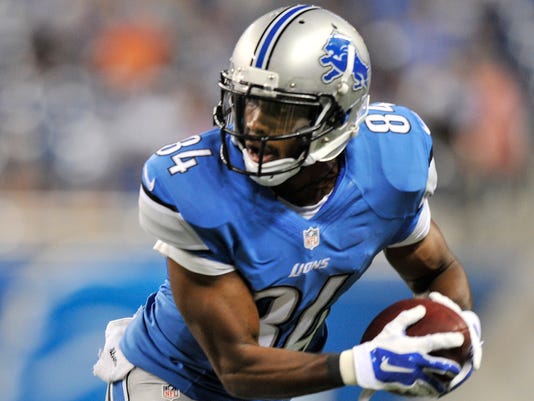 Lions wide receiver Ryan Broyles is healthy, but on Sunday, he was inactive for the third week in a row and sixth time in 11 games this season.(Photo: Robin Buckson / Detroit News)

On Friday, his car was blindsided by another vehicle pulling out of Lions headquarters, smashing the front bumper and leaving the lights hanging.

And on Sunday, he was inactive for the Lions for the third week in a row and sixth time in 11 games this season.

Murphy's Law claimed the upbeat Broyles as yet another victim, and even though insurance will pay for the car, there's no way to take his record back. Still, he knows those two incidents were out of his control and plans to email congratulations to Hardy.

"I just play the game, and if I get a record, I get a record, to be honest," Broyles said. "They're all meant to be broken so I don't feel bad about it at all. My accolades are going to say that I was that guy once and had a bunch of college records.

"Man, I'm trying to get some records in the NFL. That's all I'm worried about right now."

It's hard to set records on the sideline. The Lions offense has been floundering this season as the team is averaging just 17.9 points per game, and even though Broyles is healthy after having season-ending leg injuries the past three years, coaches haven't given him a chance to provide a return on the team's second-round investment in 2012.

"I'm healthy, so that's really the most frustrating part that I'm not able to go out there and help the team, especially the way the offense is going right now. I feel like we all want to make more plays, and I haven't had the opportunity to do that."

Broyles was active from Weeks 4 through 8 this season only because Calvin Johnson was hobbled or out with a high-ankle sprain. In those five games, he had just five targets, but both of his catches — totaling 25 yards — converted on third downs.

In Johnson and Golden Tate, the Lions have two of the top receivers in the NFL, so stealing time from them won't happen.

But the other two active receivers haven't been especially productive. With 20 catches for 239 yards, Jeremy Ross is averaging 21.7 yards per game, and Corey Fuller (13 for 191) is averaging 17.4. Lions offensive coordinator Joe Lombardi said last week the specific roles for Ross — the return man — and Fuller — a speedy deep threat — have led to Broyles being inactive.

"It's nothing that he's doing wrong," Lombardi said. "If he were playing, I think we'd be very pleased with it. It's just there are only so many jerseys that we get on game day."

Broyles' frustration leaked out on Twitter after a Week 6 win over Minnesota in which he played just two snaps. In response, coach Jim Caldwell said he had an open-door policy with his players, and Broyles said he's spoken with Caldwell a few times.

Broyles said he actually feels faster now than before tearing the anterior cruciate ligament in his left knee in 2011 at Oklahoma, the ACL in his right knee in 2012 and the Achilles tendon in his left leg in 2013.

"I've pretty much done everything I need to do to get back and better," he said. "I don't really have an answer. I'm just here, and they have a plan. And if that plan includes me moving forward throughout the season, I'm here."