Jason Jones didn't expect to see any of his teammates Monday, but he was surprised.

Lions defensive end Jason Jones speaks during a ceremony to have his Southfield-Lathrup No. 19 jersey retired Monday night. The ceremony was at halftime of the boys basketball game at Southfield-Lathrup High School on Monday, Dec. 15, 2014. Bryan Mitchell / Special to The Detroit News
Fullscreen

Detroit Lions defensive end Jason Jones thanks the crowd during a ceremony to have his Southfield-Lathrup No. 19 jersey retired. Bryan Mitchell / Special to The Detroit News
Fullscreen

Gloria Jones watches and listens to her son, Detroit Lions defensive end Jason Jones, thank everyone during a ceremony to have his Southfield-Lathrup No. 19 jersey retired. Bryan Mitchell / Special to The Detroit News
Fullscreen

Detroit Lions defensive end Jason Jones, in the red shirt, goofs off while posing for photos with some of his Lions teammates during the ceremony. Bryan Mitchell / Special to The Detroit News
Fullscreen

Detroit Lions defensive end Jason Jones, in red shirt, poses for photos with some of his Lions teammates during the ceremony. Bryan Mitchell / Special to The Detroit News
Fullscreen 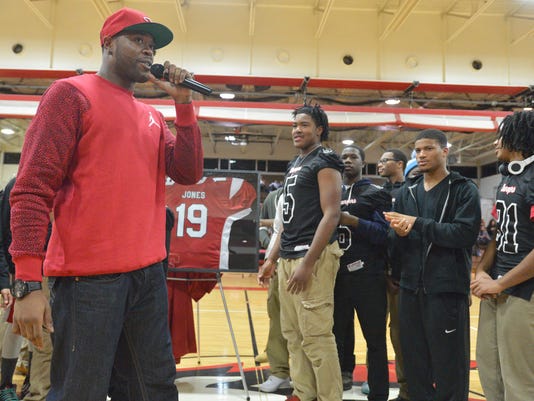 Jason Jones: “To have everybody here to support me means everything.”(Photo: Bryan Mitchell / Special to Detroit News)

Southfield — A victory over the Vikings meant the Lions players had Monday off, so defensive end Jason Jones didn't expect to see any of his teammates.

But he was surprised by several who attended the retirement of his jersey from his alma mater, Southfield-Lathrup High.

"I'm honored to get my jersey retired but to have everybody here to support me means everything."

Jones, who also played at Eastern Michigan, is in his seventh year in the NFL and second with the Lions. And although the ceremony was scheduled before his big game against the Vikings — he had a key blocked field goal that helped preserve the victory — it was good timing.

When his teammates found out about the ceremony, there wasn't a question about whether they'd be coming to support Jones.

"They said in the team meeting what was happening here," Bell said. "They mentioned it in practice on Friday and that's an amazing accomplishment. You have to be doing a lot in your community and a lot for your school for them to retire your jersey.

"It's not just what you do on the field, but also what you do off the field. That's a testament for his character and what he's been doing for the community. I'm just happy to be a part of it."

It's a long way from when Jones was a two-sport star at Lathrup, primarily playing basketball. He started playing football seriously in the 11th grade.

"We had to pull strings with his mom and dad just to get him to play football," said Stephon Thompson, his football coach at Lathrup. "Once he did, he just ate the field up. It was like pulling teeth."

Jones' mother, Gloria, said her son didn't play football until ninth grade, but didn't like it, so he stuck with basketball. But Thompson saw something in Jones and wouldn't give up until he joined the football team.

"I never did like football because I never did understand it but I always kept my boys in sports," Gloria Jones said. "(Thompson) came to me and said, 'I guarantee you if you let Jason play football, he'll get a scholarship' — and it came true."

With the Lions on the cusp of the playoffs for the first time in four years, Jones is reveling in lifting his home team.

"I grew up around this area and I've seen the times the Lions have had here," Jones said. "To be 10-4 and have a good chance right now, it means a lot for this city.

"We'll try to get a win for this city on Sunday (at Chicago)."