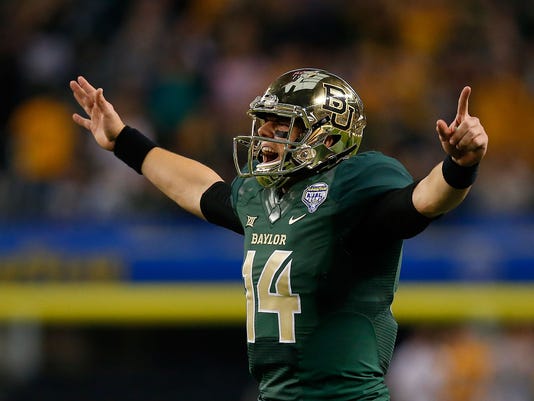 Mobile, Ala. — The Lions considered drafting a quarterback in 2014 to find Matthew Stafford's long-term backup, but some of the guys they wanted went off the board before some of their late-round picks.

In the 2015 draft, the Lions could once again look for a quarterback, and that's one of the positions the team has scouted this week during the Senior Bowl.

Baylor quarterback Bryce Petty, who's on the North team, met with a large contingent of Lions coaches and scouts in Mobile this week, including head coach Jim Caldwell and general manager Martin Mayhew. Backups Kellen Moore and Dan Orlovsky will both be free agents, which makes it even more important the Lions find a capable backup.

The Lions hoped to meet with as many players as possible this week, and even though many meetings are just one or two scouts or coaches, other players said they met with a large group from Detroit.

But Petty, more so than some of the other quarterbacks in Mobile, is an intriguing prospect for the Lions. Because the Lions have Matthew Stafford in place as the franchise quarterback, they can afford to draft a backup who's a bit of a project. Petty was prolific in Baylor's up-tempo offense, but he'll have to make adjustments to play under center and learn a more complex NFL scheme.

"I knew coming in here I wasn't going to be perfect; I was going to make mistakes," Petty said Thursday. "I just wanted to come out here and try to make a splash as much as I could. For me, this is a huge jump start for what I can expect at the next level.

And Petty is confident he can make all the necessary adjustments to play in the NFL.

Other quarterbacks on the North team are Oregon State's Sean Mannion and East Carolina's Shane Carden. The South quarterbacks are Alabama's Blake Sims, Colorado State's Garrett Grayson and Southeastern Louisiana's Bryan Bennett. All of the signal callers have been inconsistent this week, and behind Oregon's Marcus Mariota and Florida State's Jameis Winston, the quarterback class is lacking in starting-caliber talent.

Mannion could've been a high pick, but he struggled in 2014. However, he said he thinks those trials on a 5-7 Oregon State team ultimately helped him.

Bennett is a prospect who many teams will consider because he spent three years at Oregon, including one as Mariota's backup in 2012. He took a red-eye flight from California to Mobile Tuesday night to replace Auburn's Nick Marshall, who's now playing cornerback.

Although most of the prospects want to be starters in the NFL, some of them see value in learning behind a veteran like Stafford.

"As a competitor I want to play, but at that next level, it's all about understanding your role," Petty said. "If that is the case, I'm going to be the best backup there is. Either way, I'm going to work my butt off to start."

East Carolina wide receiver Justin Hardy, who broke Ryan Broyles' NCAA record for career receiving yards, said he also had an interview with several Lions coaches and scouts. The 5-foot-10 1/2 Hardy projects as a slot receiver, and the Lions were scouting receivers of all sizes as they look to improve the options behind Calvin Johnson and Golden Tate.

… While defensive tackle is the biggest need for the Lions, Caldwell spent a significant portion of the week watching offensive linemen. The Lions need long-term help at tackle and guard. Among the best in Mobile were tackles La'el Collins (LSU) and T.J. Clemmings (Pittsburgh) and guard Laken Tomlinson.