Lions draft preview: Receivers will be worth a look 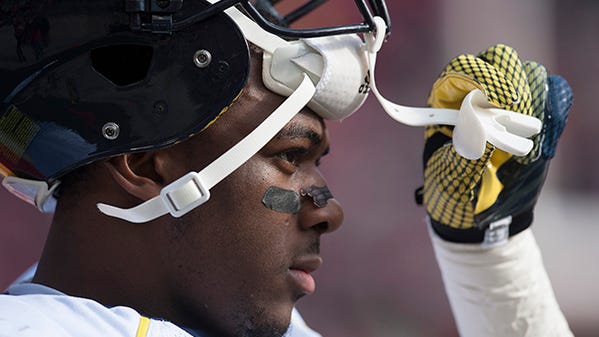 This is the fifth in a series of Lions position previews for the NFL draft. Today: Receivers.

The Lions have tried with varied success the past handful of years to give Matthew Stafford more receivers besides Calvin Johnson who can threaten a defense.

Finally, the Lions have a legitimate No. 2 receiver capable of being a No. 1 in Johnson's absence with Golden Tate, signed as a free agent before last season.

And while Johnson and Tate are one of the top receiving tandems in the NFL, the Lions could consider drafting a receiver to add yet another threat to put more pressure on opposing defenses. With Johnson turning 30 this season, the Lions might also want to find a big receiver who can eventually take over for the three-time first-team All-Pro.

Picking at No. 23, the Lions will likely have a shot to draft a top-tier receiver prospect in the first round, including Central Florida's Breshad Perriman, the son of former Lions receiver Brett Perriman.

Jeremiah, though, continued to say that offensive line and running back are more pressing needs for the Lions, especially with the team expecting tight end Eric Ebron to be the offense's No. 3 receiving weapon. Defensive tackle is a need, too, and the need on the whole isn't obvious when looking at the Lions' depth chart.

Plus, Ross' struggles as a returner late in the year have the Lions considering a change there. In addition to Perriman and Louisville's DeVante Parker, the Lions have hosted Alabama-Birmingham's J.J. Nelson, Kansas State's Tyler Lockett, William & Mary's Tre McBride, Utah's Kaelin Clay and Western Oregon's Tyrell Williams on pre-draft visits. Those are five of the best return men in the draft, so when the Lions consider drafting a receiver, his special teams ability could be a factor.

* Go through the gallery above or go here for Josh Katzenstein's top 10 receivers in the NFL draft.