Lions say they'll be just as exciting without Ndamukong Suh

The Lions haven't shied away from the stance that they expect to be better in 2015 despite losing All-Pro defensive tackle Ndamukong Suh in free agency.

Lions say they'll be just as exciting without Ndamukong Suh 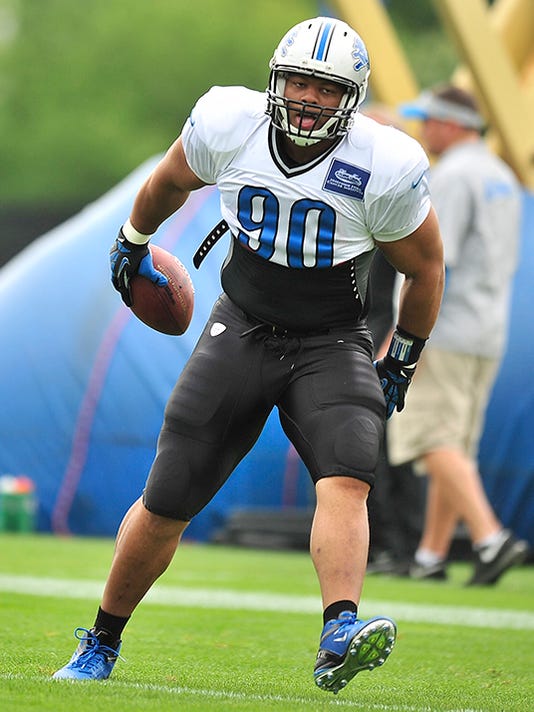 The Lions haven't shied away from the stance that they expect to be better in 2015 despite losing All-Pro defensive tackle Ndamukong Suh in free agency.

On Thursday, president Tom Lewand appeared on 105.1 FM to promote the team's new television partnership with Fox 2 and Fox Sports Detroit, which he said will help provide the fans with more access to players.

But one of the questions from radio host Rico Beard was about how the Lions will generate excitement in the fan base after losing Suh, who signed a six-year, $114 million deal with the Miami Dolphins.

"Ndamukong Suh's a great player, and there's no doubt about that," Lewand said. "We made a great effort to try and keep him. He chose to go elsewhere.

"But we feel like we've added significantly since that point in time, obviously quickly adding Haloti Ngata to the mix, and he's been one of the top defensive linemen in the league, especially on the interior. And then you see what we've been able to do in free agency and the draft, and I think that only enhances the nucleus that we have in place. And that at the end of the day is the most important thing."

Besides trading a fourth- and fifth-round pick to Baltimore for Ngata, the Lions made few significant signings of players from other teams in free agency. Defensive tackle Tyrunn Walker, formerly of the Saints, is the only non-Lions free agent whose contract exceeds $1 million in 2015 ($1.75 million).

However, the Lions are hoping some of their below-the-radar veteran signings of players such as cornerback Josh Wilson, wide receiver Lance Moore, and defensive ends Phillip Hunt and Corey Wootton, can provide a big return on investment.

One of the Lions biggest acquisitions came in the draft, when they received veteran offensive lineman Manny Ramirez from the Denver Broncos by trading down in the first round. Plus, the Lions hope for production from their seven draft picks.

Whether the Lions improve in 2015 won't be determined for months, but the plan for this offseason seemed rather clear. They wanted to maintain one of the top run defenses in the NFL while improving the run game on offense, and improve pass protection after Matthew Stafford took a career-high 45 sacks last season.

"They share a common vision and that common vision is being able to run the ball, be able to stop the run like we did last year," he said, "and being able to be efficient, take care of the football and pay attention to the fundamentals, and details that are so important when you're talking about the game of inches that is the NFL."