Lions president Tom Lewand promised new amenities at Ford Field for 2015, and the team announced one of its additions on Tuesday.

This is a rendering of the view from the MGM Grand Detroit Tunnel Club.(Photo: Detroit Lions)

In 2015, some Lions fans will have a chance to watch players make the march from the locker room to the field every game at Ford Field.

But fans who want to experience this new premium feature — which is part of a long-term partnership with MGM Grand Detroit — will have to pay for it.

The MGM Grand Detroit Tunnel Club will give about 120 fans a chance to watch players exit and enter the locker room. These fans will see the excitement of the Lions before the game and the raw emotion after, win or lose.

The new area will have about 70 tickets available for purchase at $9,500 each per season. Tickets must be bought in pairs or groups of four. The other 50 seats will be for guests of MGM.

James Ihedigbo shows up at Lions' OTA, after all

Wade Martin, the Lions' vice president of corporate partnerships, said MGM is the perfect partner for this project because of the casino's experience in luxury accommodations. With the new space, the team and MGM hope to create "truly a once-in-a-lifetime experience," Martin said.

"We didn't set out to do this and just decide to slap a partner logo on the space," he said.

To accommodate the fans, the west end zone's lower bowl will be extended to add field level seating for Tunnel Club members. There will be bleacher-style seats where fans can look through glass to see the players.

The new area will also offer unlimited food and beverages (cash bar for liquor), a lounge celebrating Detroit, and the chance to enter the stadium three hours before the game. Fans can also stay in the luxury area for a couple hours after the game.

"Season members and guests will experience high energy and pronounced interactivity with Lions players throughout game day," team president Tom Lewand said in a statement. "They'll be right there when the players are coming in and out of the locker room for pregame, halftime and postgame. That type of engagement can't be replicated anywhere else."

The Lions are funding the project, which will cost between $1.5 million and $2 million, according to Martin. Construction began a few weeks ago, and the new area should be open by the Lions' first preseason game on Aug. 13.

Though other teams have opportunities for premium ticket holders to see players exiting the tunnel on their way to the field, Martin said the Lions will have the closest view to the locker room of any NFL team.

This renovation is part of the new amenities Lewand mentioned in March at the team's annual town hall meeting with season-ticket holders. 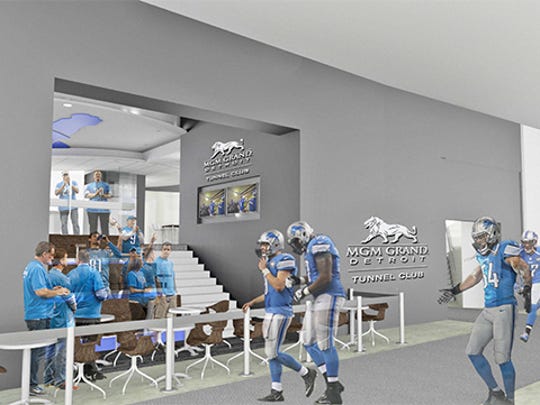 This is a rendering of the MGM Grand Detroit Tunnel Club. (Photo: Detroit News)