Lions players, including DeAndre Levy make their way onto the field at Edsel Ford High School through a corridor of football players and cheerleaders on Aug.17, 2015. Daniel Mears, Detroit News
Fullscreen 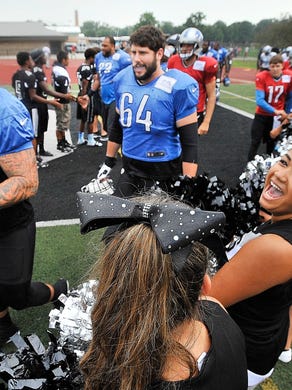 Edsel Ford High School football players and cheerleaders, including Haley Rascoe, make a corridor for the Detroit Lions as they make their way onto the high school football field for practice. Daniel Mears, Detroit News
Fullscreen

Quarterback Matthew Stafford is all smiles as a light rain falls at the start of practice. Daniel Mears, Detroit News
Fullscreen

Injured running back Joique Bell, who did not participate in drills, watches his teammates go through practice. Daniel Mears, Detroit News
Fullscreen

Defensive tackle Haloti Ngata, who is still injured and did not participate in drills, watches his teammates work through the evening practice. Daniel Mears, Detroit News
Fullscreen 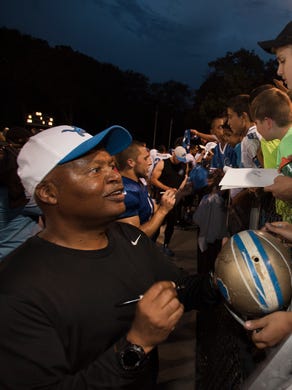 Dearborn — Lions coach Jim Caldwell said last week there was a chance the team would experiment with more 2-point tries during the preseason.

In the first exhibition, the Lions didn’t try any, opting to kick the 33-yard extra point after both touchdowns in a 23-3 win over the New York Jets.

If Monday’s practice was any indication, though, the Lions could go for 2 if they have the opportunity in Thursday’s game at Washington.

During training camp at Edsel Ford High, the Lions spent a significant portion of team drills running and defending plays from the 2-yard line, which is where the 2-point try begins. Based on the plays, the offense has the advantage in the short-yardage situation at the moment.

Matthew Stafford and the first-team offense scored on four of five attempts. The fifth was actually ruled a conversion, but the ref didn’t see that the ball likely hit the ground before Calvin Johnson corralled it — a ball that might have been intended for Ameer Abdullah. George Winn scored on runs on two of the others, and Zach Zenner and Theo Riddick each scored, too.

For the backups, Kellen Moore led three conversions on four attempts. The defense stopped Desmond Martin in the backfield on the first play, but Zenner ran the next one in and Martin scored after that. Moore threw a score to Abdullah on the second team’s final rep.

Dan Orlovsky led one play with the third unit, but the defense stopped Martin before the goal line. Overall, the offense scored on seven of 10 attempts — or eight for those that think replay wouldn’t have led to Johnson’s catch being overturned.

Here are some other observations from Monday’s practice:

*Gabe Wright had one of the best one-on-one pass rush plays of training camp. He exploded off the snap so quickly that it was hard to tell which lineman was supposed to block him, though it looked like Taylor Boggs. In a game, Wright would’ve had one of the easiest sacks ever.

*Boggs made up for the play later with a pancake block on one of the other defensive tackles.

*Another highlight of practice was Ryan Broyles winning a 50-50 ball against cornerback Chris Owens. The two players went to the ground with their hands on the ball, and Broyles came away with it.

*Riley Reiff has won the majority of one-on-one plays against Ezekiel Ansah, but the defensive end beat Reiff, the left tackle, on their two reps Monday.

*Theo Riddick ran routes with the wide receivers during one-on-one drills against cornerbacks. It’s possible he’s done this already in training camp — he and Reggie Bush frequently worked with receivers during the 2014 practices — but the work is a sign that the coaches realize Riddick’s best chance to contribute could be in the slot. On his first play, cornerback Josh Wilson bumped him hard at the line in press coverage, but Riddick slipped free to make a nice catch.

*Johnson seemed to be getting every call during the session. During one-on-one drills, Johnson gave Mathis a hearty shove during his route, but the ref didn’t call offensive pass interference. Mathis and his fellow cornerbacks gave Johnson a hard time after the play, though.

*Zenner had an excellent day all around, running with purpose on each touch. He showed good burst to the edge and top-end speed on a toss to the right. He also looked really slippery on an inside run with a tight window on a 2-point conversion.

*On those 2-point tries, the group of defensive linemen on the first play was Darryl Tapp, Ezekiel Ansah, Caraun Reid, Tyrunn Walker, Phillip Hunt and Jermelle Cudjo. Though Hunt hasn’t flashed as much as Cudjo in camp, their use in that group is a good sign for their current roster standing. Hunt also recovered a fumble in one team drill, but he appeared to be offsides to start the play.

*In the hurry-up offense, Matthew Stafford threw an interception to James Ihedigbo after sailing a pass intended for Eric Ebron.

*Greg Salas, a star in Thursday’s exhibition, had a strong performance. He caught one deep pass from Dan Orlovsky in 11-on-11s and was running with the first-team offense for a portion of practice.

*Matt Prater was perfect on the day, including three field goals from 47 yards early in practice. Kyle Brindza struggled, going three for five on the 47-yarders and missing another field goal at the end of practice. The high school goal posts are wider than the NFL ones, too.