He's having his most efficient preseason since 2011 and then passed for 5,038 yards and 41 touchdowns when it counted. 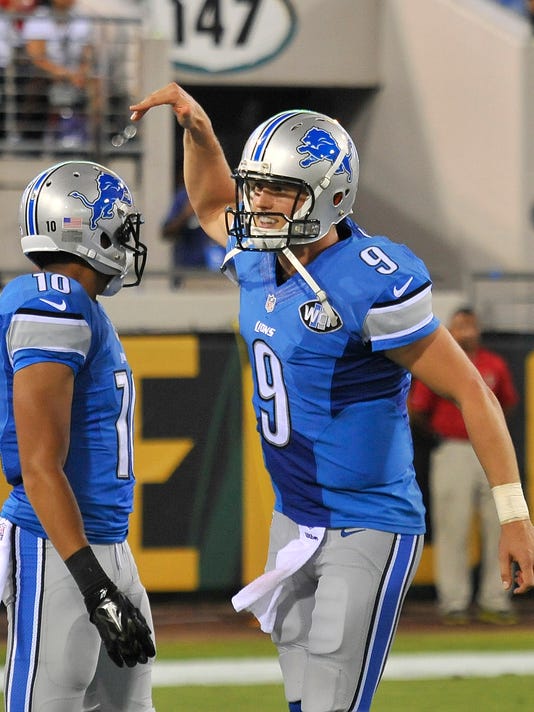 Entering Saturday night's exhibition games, Lions quarterback Matthew Stafford ranked third in the preseason in passer rating. Drew Brees of the Saints has played just one exhibition thus far and has a perfect 158.3, and the Falcons' Matt Ryan was perfect through two games, but his rating will plummet after going 3-of-7 for 49 yards against the Dolphins.

Stafford, meanwhile, has a 156.3 passer rating through three games, and even though his 48 snaps are a small sample size, he's having his most efficient preseason — 76 percent completions, zero turnovers — since 2011 when he completed 75.8 percent and had a 154.7 rating. Then, he threw for 5,038 yards and 41 touchdowns when it counted.

"It sure feels a whole lot better than coming out and playing bad and throwing three picks and no touchdowns," Stafford said of his exemplary performance so far. "I'd rather have the three touchdowns and no picks going into the season. It's a good feeling. It's something to build on, (but) we still have guys that we need to (get) back in the mix."

Stafford hasn't played a snap with starting running back Joique Bell this offseason, and when he went 11 of 15 for 173 yards and two touchdowns Friday against Jacksonville, his top offensive lineman — right guard Larry Warford — was out.

And, believe it or not, Calvin Johnson actually played three exhibition games in 2011, catching a combined four passes for 106 yards and a score.

"Calvin's a pretty good player, so it'll be nice to get him back out on the field when we start playing," Stafford said.

Meanwhile, Golden Tate has looked capable of being the No. 1 target whenever necessary, and Stafford has thrown some perfect passes to him, including a 62-yard touchdown pass he floated 50 yards that gave Tate just enough time to gain position on Jaguars cornerback Aaron Colvin and a 35-yard score where he helped lead Tate for yards after the catch on a crossing route.

This is also the first preseason since 2011 during which Stafford hasn't thrown an interception.

"It's been good, but there's stuff I can work on — there's no question," Stafford said.

One of the problems Stafford noted was a fumbled exchange with center Travis Swanson in the first half for which he took the blame. He also wanted his first third down pass back after throwing long for running back Ameer Abdullah on a wheel route.

Stafford tried to take the blame for his incompletion to Greg Salas that ended the next drive, but it looked like the kind of back shoulder, timing pattern he and Johnson would have connected on easily.

"There's no question about it, he's been improving," coach Jim Caldwell said.

The Lions coach discusses a lackluster performance by his starting defense in Friday's exhibition win over Jacksonville.

Even though Johnson didn't play Friday, he ran routes in full pads during warm-ups. Stafford said he's not worried about having a rapport with Johnson and that they've had a "good thing" going on in practice right now.

And a year after Stafford took nearly three sacks a game, the Lions offensive line has allowed just one sack during his snaps. Plus, it looked pretty good on the deep toss to Tate Friday.

"Offensive line did a heck of a job," Stafford said. "I told them if they give me time like that on shot plays, it's going to be a fun year with them."