Mathis: No issue with how Lions handled his concussion

Mathis: No issue with how Lions handled his concussion 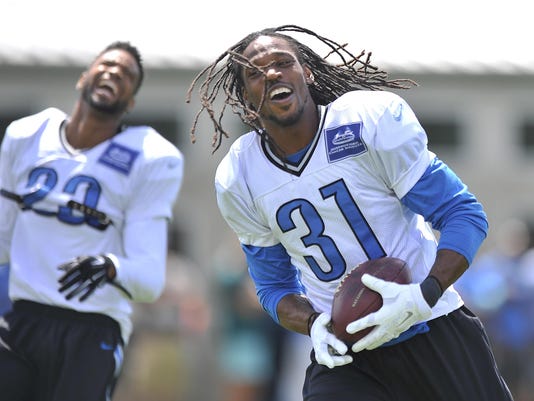 Lions cornerback Rashean Mathis (31) said he has no issue with how the team handled the diagnosis of his concussion. Mathis is on season-ending injured reserve.(Photo: Daniel Mears, Detroit News)

Allen Park — Lions cornerback Rashean Mathis said he has no issue with how the team handled the diagnosis of his concussion.

The 35-year-old felt the effects of the brain injury for three weeks, and although he’s symptom-free now, the ailment eventually led to the team putting him on season-ending injured reserve last week.

While Mathis doesn’t have a problem with the handling of the ailment, he did take issue with the media referring to it as a brain injury — even though it’s accurate — and indicating the brain injury forced him to go on IR in published reports.

Mathis said the brain injury phrasing led friends and family members to overact about his health, he said.

“It’s a concussion, technically a brain injury, but I’m not going brain dead,” he said Wednesday. “And that is for my family and my friends and the fans who were concerned as well.”

Another reason he didn’t like the phrasing was he was involved in the team’s decision to put him on IR, which executives made in part to free a roster spot for a healthy cornerback (Crezdon Butler) before last Sunday’s game. As of Wednesday, Mathis already was symptom-free, but he agreed with the team’s decision to end his season prematurely.

“I don’t think it would’ve looked well for the organization or my part … for me to go back out there and then something bad — worse — happened,” he said. “And then the organization and my family would have to answer questions about that and not knowing.”

Mathis is under contract for 2016, but he said he’s unsure if he’ll return next season because it’d be naïve not to be thinking about his future.

“I know there’s life after football, and I take that very seriously,” he said. “I joke all the time, ‘I want to be on the golf course playing when I’m 80 years old, not laying in bed.’

“But that’s a true statement even though I say it jokingly.”

Mathis suffered the brain injury in a Week 7 loss to the Vikings, but an independent neurologist decided he didn’t have one when evaluating Mathis after the game. It’s unclear whether Mathis suffered the concussion on a first-quarter tackle of running back Adrian Peterson, which forced him out of the game briefly, or in the fourth quarter, when he exited to undergo testing in the locker room.

A few days later when the Lions were in London, Mathis started to suffer from headaches and later missed the Week 8 game with what the team called an illness. The team finally diagnosed him with a concussion after returning to Detroit.

“I think we as an organization have handled it correctly,” Mathis said. “Why diagnose something when you don’t know exactly what’s going on? Because there were a few days without any symptoms.”

In his 13-year NFL career, most of which was spent in Jacksonville, Mathis said he’s had one concussion diagnosed and another one that was questionable.