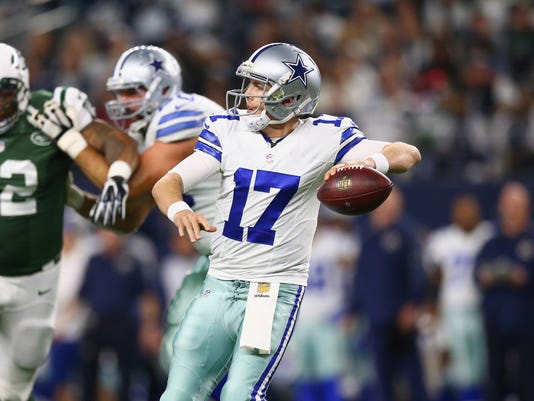 Allen Park — Lions quarterback Matthew Stafford was "dead tired" as he watched last Saturday night's game between the Cowboys and Jets. Then, in the second quarter, he suddenly had a good reason to stay up.

Among the text messages: "He's in!"

"I'm fired up," Stafford said. "I was texting (Moore) a bunch and happy for him."

Now in his fourth season, Moore finished the game 15-of-25 for 158 yards with one touchdown and three interceptions. Considering the circumstances against a good Jets defense, Stafford thought Moore played well.

"First live action, probably didn't get a whole bunch of reps during the week," Stafford said. "That's a tough defense to open it up against, but he'll play good for them. He's a good player."

Moore joined the Lions after going undrafted in 2012 and spent the next three seasons on the roster, but was never active. He was the No. 3 quarterback behind Stafford and Shaun Hill his first two years and Stafford and Orlovsky last year.

Like many backups, running back George Winn spent much of the preseason the past two years playing with Moore.

"I thought he was a great leader, and I really enjoyed him a lot," Winn said. "I'm happy for him."

In his fourth training camp, Moore started to earn more reps with the second-team offense as the Lions tried to decide between whether he or Orlovsky should be the No. 2 quarterback. Those opportunities gave starters more chances to work with Moore, too.

"He doesn't have the most athletic (body) or the most arm strength, but I always thought he had really good touch," wide receiver Golden Tate said. "I thought his anticipation was awesome. He knew he couldn't throw a comeback as you were coming out of your breaks, so he would kind of anticipate and float it. So, actually, coming out your break, the ball would still be there."

When the Lions cut him before the 2015 season, Moore joined the Cowboys practice squad, reuniting with former Lions offensive coordinator Scott Linehan. Now, he'll be the starting quarterback Sunday in Buffalo, and Stafford said he won't try to give him any tips this week.

"He doesn't need any advice from me," Stafford said. "He knows what he's doing."