With a new Lions’ GM on the way, players who might feel comfortable with their status can’t be sure where they stand. 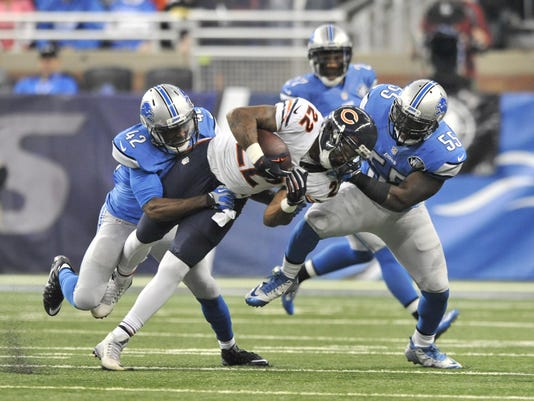 Each year, players lose jobs when their bosses decide their play isn’t measuring up to the next year on their contract. And with the Lions searching for a new general manager, even players who might feel comfortable with their status can’t be sure where they stand.

Some players stand out as potential cuts to save money against the salary cap — linebacker Stephen Tulloch has a $7.3 million cap hit, running back Joique Bell is at $3.5 million, and tight end Brandon Pettigrew would cost $4.65 million.

Several players said their focus remains on their upcoming opponent, the Bears. But as soon as that game ends, so too will the season — then the speculation begins in earnest.

So, even though some players can compartmentalize, free safety Glover Quin said he constantly thinks about his future. Quin is one of the top defensive players, but with two years left on his five-year deal, he knows nothing is guaranteed, especially considering he doesn’t have any more guaranteed money left in his contract.

“They could cut me tomorrow,” Quin said. “Heck, I don’t even know if I’m going to be back. That’s part of the business. It’s just really how it is.

“I always think about it, especially the closer we get to the offseason.”

And until the Lions hire a new general manager, the direction of the franchise remains unclear.

“Decisions will be made this offseason,” said receiver Calvin Johnson, who has been the face of the franchise for most of his career, but has a $24 million cap hit. “Who knows how soon? But at the same time, I won’t worry about it. I’m just going to get my body healthy and go from there.”

But, even if Johnson is approaching an uncertain future for the first time in his career, he’s seen players come and go every offseason.

“That’s part of the business,” Johnson said. “You never know what decisions might be made upstairs. So, one, you’ve got to cherish these moments with your teammates and just keep in contact with them. But at the same time, you never know what might happen.”

With his performance the second half, quarterback Matthew Stafford seems safe, but he has a cap hit of $22.5 million.

As for defensive tackle Haloti Ngata, who will become a free agent, he said he’s not thinking about the future because he has too much to worry about Sunday.

Strong safety James Ihedigbo will be a free agent, too, and said he’ll start thinking about the future next week.

“When that time comes, it comes,” Ihedigbo said.

Bell’s situation could be a messy one.

He said he’d “love” to retire with the Lions, but he’ll turn 30 in August and is wrapping up the least productive of his four seasons in Detroit.

Asked if he’d be open to taking a pay cut, Bell said, “I leave that to the agents.”

Some Lions will learn their fate after the Super Bowl when teams can start making money related cuts in preparation for free agency. Others will learn where they stand during free agency or the draft.

On Sunday, though, players will try to beat the Bears to potentially improve their résumé.

“As a player, you just want to try to control what you can control,” Quin said. “Go out and play well hopefully, and hope for the best.”