'Better and better': Decker arrives ready to roar with Lions 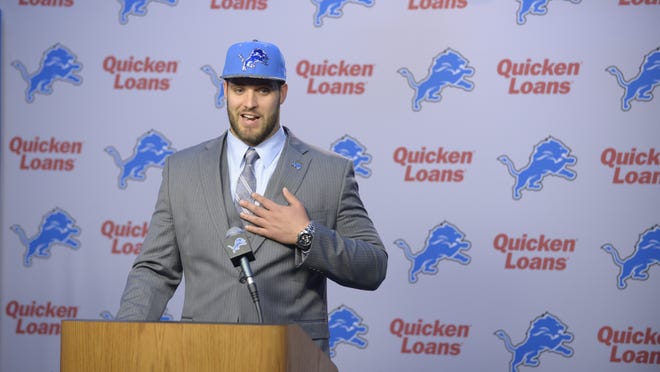 Allen Park — Taylor Decker has accomplished just about every goal of a young football player.

The Ohio native played for his home-state Buckeyes. He won the 2014 national championship as the starting left tackle. And on Thursday, he became a first-round pick by the Lions.

But, as is so often the case, all of those dreams were close to never coming true. After his freshman year of high school, Decker nearly stopped playing football to focus on basketball.

“At the time I was getting a little bit of interest and I was just playing a lot more basketball with AAU,” he said. “But I loved football. I was real skinny then, so I just needed to kind of devote myself to football in order to be better at it. So, then I decided I wanted to go the football route and quit basketball.”

Decker played basketball through his junior season, but with several FBS offers, he stopped to focus on football his senior year. Even though some people wanted Decker to specialize in one sport, Greg Bush — the football coach at Butler High in Vandalia, Ohio — thought basketball helped with his footwork.

Of course, Bush deserves credit for keeping Decker interested in football early in his high school career. When one recruiter from a Midwest college came to look at some of the upper classmen, Bush had him talk to Decker.

“Of course, I kind of schemed it up because I told him the whole situation,” Bush said. “The scout looked at him and told Decker, ‘Yeah, you’ll play Division I football.’ And of course he didn’t know if that was true or not. It turns out, he was right.”

When the Buckeyes hired Urban Meyer in November 2011, Decker was suddenly on their radar. Meyer hired assistant coaches Ed Warinner and Tim Hinton away from Notre Dame. Those two coaches recruited Decker to Notre Dame starting his sophomore year, and after Meyer called him in December, the chance to join Warinner and Hinton at the school he grew up wanting to play for led to a fruitful career at Ohio State.

Decker graduated high school early and joined the Buckeyes in spring of 2012. He was a backup and played special teams as a freshman, but another session of spring practices gave him a chance to earn the starting right tackle job.

“That was like a nightmare,” said Warinner, offensive coordinator and offensive line coach during Decker's OSU career.

Decker’s trial by fire began with a matchup against linebacker Khalil Mack, the fifth-overall pick the following spring and already one of the NFL’s top defenders. The Buckeyes beat Buffalo, 40-20, but Mack terrorized Decker to a total of nine tackles, 2.5 sacks and an interception return for a touchdown.

“No one thought Mack was that good at that time,” Warinner said. “So it was a rough start for Taylor. He lost his mojo, and he was down. And we kept the faith in him, kept his confidence high, told him we believed in him and told him go to work and let’s go back out there.

“And he never struggled again after that, just continued to climb and get better and better.”

For Decker, the matchup against Mack provided a reminder to never take an opponent lightly. It also gave Warinner a reason to coach up Decker on pass blocking even though Ohio State had a run-heavy offense.

In the final game of the regular season, Warinner said Decker was Ohio State’s highest-graded offensive lineman in a win over Michigan in which the Buckeyes had 393 rushing yards.

Decker played left tackle the last two years, and he was a captain as a senior on a team that ultimately had five players selected in the first round Thursday. Warinner said Decker was a tone-setter for his teammates, who respected his combination of high performance and leadership.

Bush recognized similar leadership traits from a younger Decker, too.

But, Bush also coached Decker in little-league baseball, and he recalls one example of an adolescent Decker — who played first base because of his size — not being the best example for his teammates.

“He just kind of lollygagged out there to first base, last guy off the bench after an inning change or whatever,” Bush said. “So, I pulled him back in and put some kid in who didn’t know whether to put his glove on the right hand or left hand.

“Decker never walked again, to a drill in high school or anything.”

‘Checks off all the boxes’

On Thursday night, the Lions ran to take Decker, filing the pick with a large portion of the 10-minute clock remaining.

“He’s a guy that checks off all the boxes for us,” coach Jim Caldwell said. “Toughness, athleticism, size, intelligence. … He understands what winning is all about.”

But, Decker also has interests outside of football that made him appealing. Despite having the demands of a Big Ten football player, Decker spent the past two summers working at the Columbus Zoo because he needed 200 hours in an internship for his degree in animal sciences.

Decker said he was always interested in animals, and he proved that when he cut his hair and shaved at the request of Suzi Rapp, vice president of animal programs. For the internship, Decker would travel with animals for shows at local schools and libraries.

“He was an absolute pleasure,” she said.

Among the animals with which he worked were leopards, a tiger and a baby red river hog.

“He could squish them with his thumb if he wanted to … but he’s just like a teddy bear,” Rapp said.

Wojo: Lions GM Quinn opts not to gamble, for now

Decker fit in so well at the zoo that Rapp has told him he can come back if football doesn’t work out. Jack Hanna, director emeritus for the zoo, even asked Decker to be his bodyguard.

Ultimately, the Lions are more interested in Decker playing like a mauling jungle cat than having him work with them. And as good as Decker’s college tape looked, his practices at Ohio State prepared for him the NFL just as much as he had daily matchups against defensive end Joey Bosa, the No. 3 overall pick by San Diego on Thursday.

“I watched that every day, and if you can block Bosa every day, then I know he can block just about anybody he’s going to have to go against,” Warinner said.