Lions wide receiver Marvin Jones played with several future NFL players at California, and he’s already been in the league for four years. 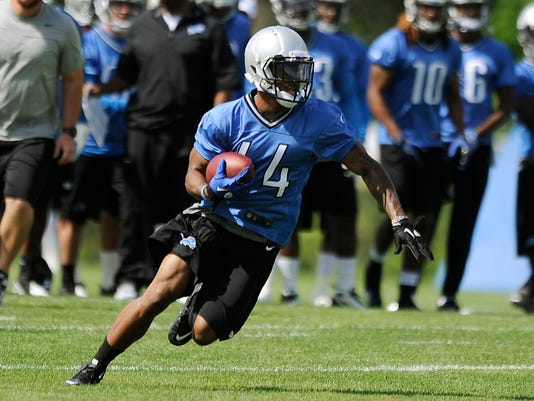 But he’s still never seen anybody faster than Jahvid Best, the former Lions running back who was at Cal with Jones from 2008-09.

Jones has stayed in touch with his former college teammate, and when asked about Best’s pursuit of a spot on St. Lucia’s Olympic track team — as reported a couple weeks ago by St. Lucia News Online — Jones said Best “has Olympic speed.”

“Man, he was the fastest guy that I’ve ever seen on the field,” Jones said. “When I first went (to Cal), I was saying, ‘This can’t be real.’

“The way he moved and how fast he was, how he could shift and break on a dime and stuff like that, so he was one of the greatest players that I’ve ever seen physically.”

Jones is such a believer in Best’s speed that he sent his sister to work at the ALTIS training facility in Phoenix, where Best is training. Vanessa Jones is a hopeful representative for the U.S. track team in the 400 meters or 4x400 relay this year, and Marvin is paying for her training and living expenses in advance of the 2016 Summer Olympics, according to ESPN.

A first-round pick in 2010, Best played for the Lions for just two seasons before concussion symptoms forced him into early retirement. He ran the 40-yard dash in 4.35 seconds at the combine, and his speed was so impressive that former Lions coach Jim Schwartz said the back’s highlights got him “aroused.”

According to St. Lucia News Online, Best is hoping to represent his father’s nation in the 100 meters, and at a track event in San Diego on April 2, he ran the sprint in 10.16 seconds, which would be faster than the St. Lucian national record of 10.17 seconds. Jones said Best set a personal record recently, but it’s unclear if he meant the 10.16 or a faster time in training.

“I just want to bring pride to Saint Lucia, to the Olympic team, to the sport of athletics,” Best told St. Lucia News Online. “I want to carry the flag around the track and make my family and country proud. I will be seeking a place on the team, representing my country would mean a lot to me, and to my family.” Lions: No decision yet on cheerleaders