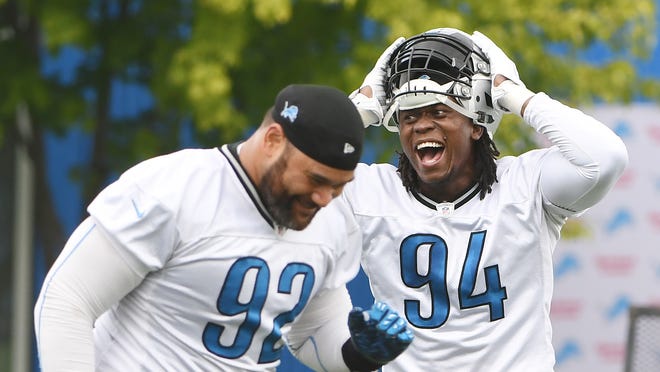 Allen Park — There were such high hopes for the top of the Detroit Lions’ 2014 draft class, but tight end Eric Ebron and linebacker Kyle Van Noy have yet to meet the lofty expectations set by the team’s fan base.

Ebron has made the natural progress you might expect at his position, jumping from 25 receptions and one touchdown as a rookie to 47 catches and five scores last year. Unfortunately for him, he’s had to deal with comparisons to defensive tackle Aaron Donald and wide receiver Odell Beckham, two players drafted just after Ebron who have already ascended to the league’s elite at their positions.

Van Noy’s struggles have been worse. A sports hernia derailed his rookie campaign and he suffered another developmental setback last offseason with a hip injury. The highly productive college standout has been unable to make an impact at the professional level, recording just 16 tackles and one sack in limited playing time the past two seasons.

Even though the two have been on different trajectories since joining the Lions, both Ebron and Van Noy are in position for expanded roles this year and both are calling it a make-or-break season.

Van Noy is locked in a competition for the starting strong-side linebacker job, where he’s been taking most of the first-team reps this offseason. He’s hoping to finally claim the job he was penciled in at when the Lions traded up in the second round to snag the BYU star.

Riddick’s worth to Lions' offense is growing

Ebron, despite a more clearly defined role, especially with veteran Brandon Pettigrew still out following last year’s ACL injury, is putting similar pressure on himself to have a breakout year.

Ebron has looked sharp in early training camp practices. He still lets the occasional pass hit the turf, but he’s regularly been showcasing his athleticism, easily getting separation from the coverage, especially in the red zone.

“It’s year three for me and it’s time to make something shake,” he said.