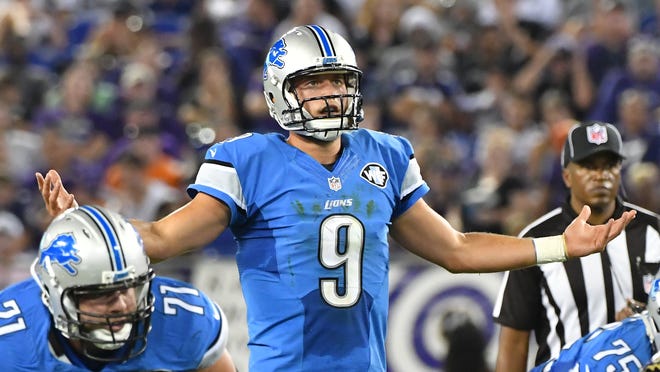 Baltimore — Firmly on the bubble as roster cuts fast approach, Detroit Lions rookie defensive end Anthony Zettel did his best to make a strong impression during the team’s exhibition game against the Baltimore Ravens.

Even though the Lions struggled on both sides of the ball in the 30-9 defeat, Zettel made an impact with his opportunities in the second half. After recording just a single tackle in each of the first two exhibition contests, the lineman out of Penn State recorded four stops against the Ravens. He also generated the Detroit’s only turnover in the contest, popping the ball free from Ravens running back Stephen Houston.

That  fumble was recovered by teammate Khaseem Greene and returned all the way to the Ravens’ 9-yard line.

“It means a lot, but I’m just trying to help the team out to get a win,” Zettel said. “I was just trying to be aggressive and come into the tackle with both arms. You’re always trying to go after the ball, but it just so happens I got lucky on that one.”

Working on both edges of the defensive line, all four of Zettel’s tackles came against the run. He consistently displayed his motor with relentless backside pursuit and the ability to shake a blocker to make the play.

Physicality has never been an issue for the 6-foot-4, 271-pounder, who played both inside and outside in college, but he says he’s been focused on mastering the small details of his craft at the professional level.

“I’m a smart football player,” Zettel said. “I’ve always been a physical player in the run game, but from a technical standpoint, I feel I’ve improved a lot.”

Zettel knows cuts are coming, and his roster spot is far from guaranteed, even as a member of general manager Bob Quinn’s first draft class. The Lions could keep as many as 10 defensive linemen, which would certainly bolster his odds, but it will depend on whether the team needs to carry extra depth at other positions.

“It’s always in the back of your mind, but you try not to think about it,” Zettel said. “You just have to do everything you can to make the team. The rest takes care of itself. You can’t predict the future, you can just try to change it.”

The Lions have four veteran defensive ends seemingly ahead of Zettel on the depth chart. Ziggy Ansah and Devin Taylor are penciled in as the starters, while Wallace Gilberry and Brandon Copeland hold the edge for the backup roles. Copeland is also one of the team’s top special teams contributors.