Former Lions wide receiver Calvin Johnson got compliments on his moves – and his smile – during his "Dancing with the Stars" debut Monday night.

Lions' Glover Quin offered up a review of ex-teammate Calvin Johnson's debut on "Dancing with the Stars." 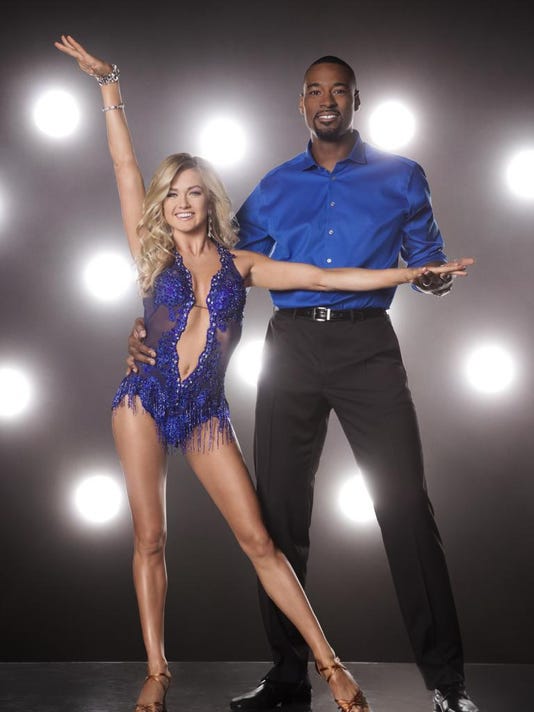 Allen Park – Former Lions wide receiver Calvin Johnson got compliments on his moves – and his smile – during his "Dancing with the Stars" debut Monday night.

Yeah, that was something new.

"Nah, I hadn't," safety Glover Quin said Wednesday, when asked if he'd seen Megatron grin that much before. "Most of the time I see him, he's up here and he's working, and he's on the practice field and he's working, he's in the game, he works very hard.

"You don't get to see him let his guard down. Well, I guess he don't have that much hair. But you don't get to really see that side of him. It was cool. It was fun.

Johnson, who retired after last season and joined the celebrity cast of ABC's hit dancing show, donned a blue, sequin-laced shirt, with his No. 81 on the back.

He also wore some white pants that came up to nearly his belly button.

"He looked really tall in those white pants," Quin said, smiling. "Oh my gosh, I thought he was least 7-foot.

"He looked like he was having fun. He looked worry-free, stress-free, like he was just living life. A guy that's done what he's done, he deserves to do that.

Lions mailbag: What's going on with the defense?

Johnson and his dancing partner Lindsay Arnold did some of their training in Detroit. They'll be back again next week, as nobody gets eliminated during the first week.

His scores weren't great, but he received rave reviews for his personality.

Several Lions, celebrating their win in the season opener over the Indianapolis Colts, had a "Victory Monday" celebration. They watched some football, then watched Johnson's initial performance on DVR.

"He did a good job. He showed his personality," Golden Tate said. "Obviously, he has a great smile. I think he had fun.

"We had a household full of folks cheering Calvin on. That was pretty fun. I thought he did well."

Lions quarterback Matthew Stafford -- the lone star personality left on the Lions, now that Johnson, at 30, has retired -- recorded Johnson's dance, and watched it after he was done watching some football Monday night.

Lions coach Jim Caldwell, meanwhile, only saw a snippet after he went searching on the Internet.

Neither was too surprised with what they saw.

"I was anxious to see him move around a little bit, so I did try to find a clip on the Internet and they showed a very small portion of the beginning of the dance, I guess," Caldwell said. "Just like anything else, one thing you find out very quickly about him, he doesn't talk much but he does things well. We had bowling contests here and he ends up being one of the top or three bowlers.