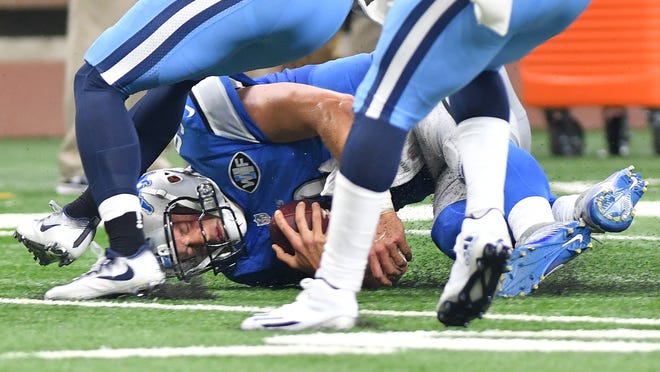 Detroit — There is lots of blame to go around for this one. The penalties, the injuries.

Golden Tate, meanwhile, would like to throw his own name into the hat.

The Lions wide receiver said he “absolutely” should’ve caught two deep balls in the fourth quarter — one down the left sideline, one down the right. Both Matthew Stafford throws appeared just long, but Tate said he’s counted on to make those plays.

And if he had, the Lions might not have lost, 16-15, to the Tennessee Titans on Sunday at Ford Field.

“Matt and Jim Bob (Cooter) and my position coach and my peers and the receivers expect me to come down with that ball,” Tate said. “Those are balls that I think I can catch. I’ve got to find a way to catch those, and that’s that. I catch one or two of those and maybe the game’s a little different.

“We didn’t make a play late in the game, and they did.”

The first pass came on second-and-16 from midfield, down the left sideline. Tate got a hand on it, but couldn’t keep control as he hit the turf. Two plays later, the Lions were punting.

Then, on the next drive and on third-and-4 from the Detroit 42, Stafford went searching for Tate deep down the right sideline. This one appeared to have been overthrown a bit, but Tate again said no. The Lions punted on the next play.

Tate catches either one of those, and the Lions are in position for at least a field goal — and, thus, probably a win and a 2-0 start.

“A couple of those balls down on the field, if it’s in my area code, I need to catch it,” said Tate, who finished with two catches for 13 yards. “I need to find a way to catch those passes thrown to me down the field.”

Tate also was flagged for two of the Lions’ 17 penalties on the day, including one for unnecessary roughness.