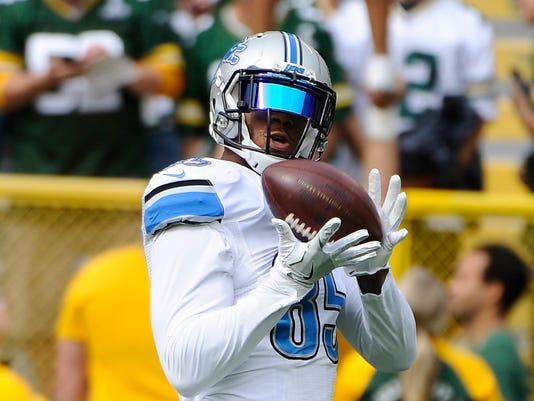 Detroit News writers predict Eric Ebron and the Lions should be able to handle the 2-7 Jaguars at home on Sunday.(Photo: Daniel Mears, Detroit News)

James Hawkins: With the lowly Jaguars limping into town on a four-game skid and the Lions coming off a bye, it seems like a prime time to pounce. But games Detroit should win haven’t always turned out as expected — just look at what happened against Tennessee and Chicago. None of the Lions wins have been easy, but this one shouldn’t need another fourth-quarter comeback. Lions 26-20

Justin Rogers: At one point this season, after the Lions lost to the Bears, I promised I wouldn’t pick the Honolulu blue again. But have you seen this Jaguars team? They’re a mess. They can’t hang on to the football and they’re awful on third downs, on both sides. The Lions are unquestionably flawed, but they’re getting it done, riding high on the arm of No. 9. Lions 24-17

John Niyo: The Jaguars haven’t led a game in more than a month. They haven’t forced a turnover in six weeks. Start fast and this one might come easier than the rest. But given the Lions' track record, who am I kidding? Lions 28-23

Bob Wojnowski: Everything says the 5-4 Lions should beat the 2-7 Jaguars by double digits, right? Well, everything except their riveting pattern of close games and Matthew Stafford-led comebacks. Jacksonville has fallen apart with four straight losses, coach Gus Bradley is on the hot seat and QB Blake Bortles has regressed. But the Jaguars defense is fairly talented, and until the Lions prove capable of blowing someone out, I’ll follow the pattern. Lions 23-17