Justin Rogers of The Detroit News breaks down how the first round of the NFL draft might play out.

2. San Francisco: Solomon Thomas, DL, Stanford. Who knows if Thomas can live up to Aaron Donald comparisons, but if he's even 80 percent of the player Donald is, it's a solid pick. That said, expect the 49ers to shop this pick hard. Marcio Jose Sanchez, AP
Fullscreen

3. Chicago: Jamal Adams, S, LSU. The Bears haven't traditionally drafted safeties early, but it would be tough to not fill the roster weakness with the prototypical LSU defensive back. Max Becherer, Associated Press
Fullscreen

5. Tennessee: Jonathan Allen, DL, Alabama. Cornerback is probably a bigger need, but when you can score an elite talent in the trenches, you shouldn't pass it up. Tony Gutierrez, Associated Press
Fullscreen

The Michigan-Ohio State game will be shown on Fox on Nov. 25. Jay LaPrete, Associated Press
Fullscreen

8. Carolina: Derek Barnett, DE, Tennessee. The Panthers patched up their pass rush in free agency with 37-year-old Julius Peppers. Charles Johnson and Mario Addison will be 31 and 30, respectively when the season starts. An injection of youth is needed. Wade Payne, Associated Press
Fullscreen

9. Cincinnati: Corey Davis, WR, Western Michigan. In recent years, the Bengals were at their best when Chad Johnson and T.J. Houshmandzadeh were paired up. It's time to get A.J. Green a viable complement on the outside. Gregory Shamus, Getty Images
Fullscreen

10. Buffalo: Mike Williams, WR, Clemson. Rex Ryan is gone, but I can't help but slot another Clemson player to the Bills. Williams would give the team a big-play pairing with another Clemson alum, Sammy Watkins. Chuck Burton, Associated Press
Fullscreen

11. New Orleans: Reuben Foster, ILB, Alabama. Sure, Foster had an altercation that led to him being sent home from the combine, but the Saints aren't complaining about the ability to upgrade a weakness with the best linebacker in the draft. Kevin C. Cox, Getty Images
Fullscreen

12. Cleveland: Mitchell Trubisky, QB, North Carolina. The Browns could have their pick of quarterbacks at 12, but it's really a choice between Trubisky and Deshaun Watson. Given how far away the Browns are from competing, we're giving them the option with the higher ceiling. Streeter Lecka, Getty Images
Fullscreen

13. Arizona: Marlon Humphrey, CB, Alabama. Already one of the top corners in the class, Humphrey (26) separated himself a bit from the pack by flashing good long speed and short-area quickness at the combine. Mike Zarrilli, Getty Images
Fullscreen 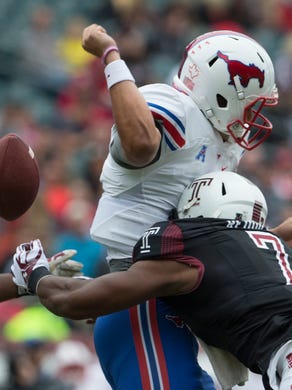 15. Indianapolis: Haason Reddick, LB, Temple. A riser through the draft process after showing better-than-expected competence playing in space and impressive athleticism at the combine. He can fit as an inside linebacker in Indy's scheme. Mitchell Leff, Getty Images
Fullscreen

16. Baltimore: Cam Robinson, OT, Alabama. The Ravens found their long-term answer on the blindside in last year's draft. Robinson is a plug-and-play option who can anchor the right side of the team's line. Michael Conroy, Associated Press
Fullscreen

17. Washington: Dalvin Cook, RB, Florida State. John Ross would be a perfect replacement for DeSean Jackson, but Washington never has shied away from a character risk, which allows it to add the dynamic Florida State back. Jason Behnken, Getty Images
Fullscreen

19. Tampa Bay: O.J. Howard, TE, Alabama: Howard turned heads with his combine performance, and the Bucs would be thrilled to add him to their budding offensive arsenal. Kevin C. Cox, Getty Images
Fullscreen

20. Denver: Ryan Ramczyk, OT, Wisconsin. The Broncos are in the market for a left tackle and Ramczyk is the best option in his class. It's a perfect fit this late into the first round. Albert Pena, Associated Press
Fullscreen

21. Detroit: Taco Charlton, DE, Michigan. With several pass-rush options still on the board, we're slotting Charlton to the Lions because his frame more closely aligns with what the team likes on the edge. David Guralnick, Detroit News
Fullscreen

23. New York Giants: Christian McCaffrey, RB, Stanford. The Giants' ground game has been pitiful for a few years. McCaffrey is a do-everything back who can run between the tackles and line up in the slot. He would ease the weight of carrying the offense from Odell Beckham's shoulders. Ezra Shaw, Getty Images
Fullscreen

24. Oakland: Malik McDowell, DT, Michigan State. The Raiders might ask McDowell to pack on some weight to handle the rigors on playing inside most downs. Dale G. Young, Detroit News
Fullscreen

25. Houston: Deshaun Watson, QB, Clemson. We all assume this is Tony Romo's eventual landing spot, but the veteran QB will turn 37 before the start of the season. The Texans can secure the future of the position by adding Watson. Streeter Lecka, Getty Images
Fullscreen

27. Kansas City: Teez Tabor, CB, Florida. As if it wasn't difficult enough to throw against the Chiefs, Tabor (31) paired with Marcus Peters would be an incredibly athletic duo on the outside. Mark Humphrey, Associated Press
Fullscreen

28. Dallas: Takkarist McKinley, OLB/DE, UCLA. The man they call Takk should have the Cowboys rushing to the podium. The talented pass rusher would give the defending NFC East champs the juice they need coming off the edge. Rick Bowmer, Associated Press
Fullscreen

29. Green Bay: Forrest Lamp, OL, Western Kentucky. With T.J. Lang packing his bags and returning home to Detroit, Green Bay won't be forced to rely on Lane Taylor if they snag Lamp at the back end of the first round. Hans Pennink, Associated Press
Fullscreen

31. Atlanta: Charles Harris, DE, Missouri. Vic Beasley’s emergence was critical to the Falcons' defensive improvement in 2016, but they need more pass-rush pressure and Harris is a guy who can give it to them. Jeff Roberson, Associated Press
Fullscreen

32. New Orleans: Patrick Mahomes, Texas Tech. What? A quarterback? To the Saints? Hear me out. Drew Brees is 38 and is on a one-year deal. The end is coming sooner than later. Why not groom a replacement, and Mahomes has as much potential as any QB in the class. Christian Petersen, Getty Images
Fullscreen 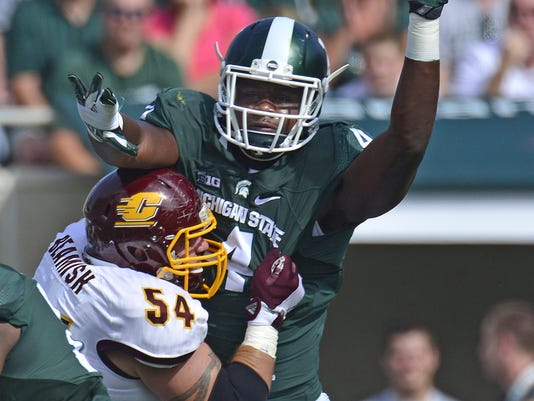 Michigan State defensive lineman Malik McDowell (4) is a prospect teams are considering in the first round of the NFL draft.(Photo: Dale G. Young / Detroit News)

First, the NFL held its annual scouting combine. And while the event should have minimal influence on where a player is selected in the draft, it does matter. A strong or poor showing in the drills, or even the interview process, can separate a player from a pack of similar talents at his position.

And don’t think for a second that a great performance doesn’t influence some NFL decision makers. Wide receiver John Ross certainly helped himself by running the fastest 40-yard dash ever recorded at the event, and a player like Connecticut safety Obi Melifonwu undoubtedly shot up more than a few draft boards with a well-rounded performance that included top numbers at his position in the 40, vertical and broad jumps.

Beyond the combine, the primary wave of free agency is complete with many teams plugging roster holes with long-term contracts. For example, by inking Rick Wagner and T.J. Lang, the Detroit Lions are no longer in the market for an offensive lineman in the early rounds of the draft.

With those two things in mind, reassessing where teams still have needs while making slight adjustments to prospect perceptions following the combine, we’ve taken a second crack at projecting the first round.