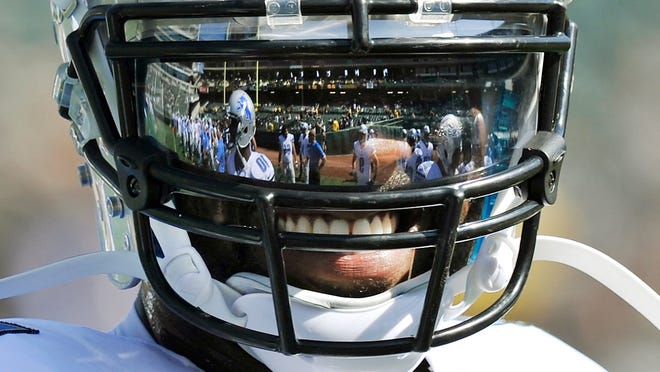 Allen Park — There isn’t a manual for these things. But when you begin examining how NFL franchises have handled similar issues over the years, a pattern has developed: There’s a right way and a wrong way for an organization to handle the retirement of a player still under contract.

Calvin Johnson isn’t happy with the way the Detroit Lions treated him following his decision to retire last year. History shows he has a right to be disappointed.

When Johnson decided to call it a career last March, the timing was beneficial to the team. He gave the front office ample warning he was considering retirement, and he made it official before the start of free agency. That provided the Lions the time and resources to properly pursue a replacement plan.

In turn, the Lions asked Johnson to repay a prorated portion of his signing bonus. The team had the right to seek repayment of $3.2 million, but the two sides settled on $320,000, 10 percent of the amount.

When the team announced Johnson’s retirement, the release stated contractual matters “were settled to the satisfaction of the parties.”

Apparently, there are two sides to the story, and Johnson didn’t appreciate being squeezed for the returned bonus money.

“I just didn’t feel like I was treated the way I should have been treated on the way out,” Johnson told the Detroit Free Press at his youth football camp over the weekend. “That’s all. I mean, it’s all good. I’m not tripping. I don’t feel any kind of way, just hey, that’s what they did. Hey, it is what is.”

While the team had the right to pursue the return of the bonus money, it doesn’t mean it was the right choice.

Franchises have handled it differently over the years, and it largely depends on the circumstances surrounding the player’s retirement.

Unlike Johnson, who gave the Lions ample warning, teams don’t like it when you retire right before training camp.

That’s what Barry Sanders did to the Lions in 1999, after playing just two seasons of his six-year deal. He was hoping to force the organization to release or trade him, instead they filed a grievance and Sanders was required to pay back $1.83 million.

The same thing happened with running back Ricky Williams, who retired before training camp in 2004. An arbitrator determined he had to repay the Miami Dophins $8.6 million.

Borland, a third-round pick, called it a career after playing just one season. He recorded 108 tackles as a rookie. Davis briefly returned after a one-year hiatus, but retired again early last season after suffering a concussion.

On the other side, many teams don’t seek bonus repayment. Two recent examples are running back Marshawn Lynch and quarterback Tony Romo. The Seahawks and Cowboys were both in a position to recoup millions, but opted against it for the longtime contributors to the franchise’s success.

Even the notoriously money-conscious Patriots aren’t ruthless in this department. The franchise gave Reggie Wayne $450,000 to sign in 2015, but the two sides agreed to mutually parted ways after just 11 days. The receiver said he would have given the bonus money back, but the team told him to keep it.

The Lions made a business decision, one that benefited the organization very little financially, but managed to sour the relationship with one of best players in franchise history.

While Johnson arguably had something left to give football at the age of 30, his mind wasn’t committed and his body was breaking down. He decided it was the right time to step away. But he gave the Lions everything he had for nine seasons. He played through countless injuries, posted record-breaking numbers and always carried himself with class off the field and in the community.

The Lions could have treated Johnson like Lynch or Romo, respecting his contributions to the franchise. Instead, they fought to get back what amounted to approximately 0.2 percent of their total cap space.

When Johnson made his decision, the Lions front office was inexperienced. General manager Bob Quinn and president Rod Wood were both rookies in their positions. It was also new ground for owner Martha Ford, who had been at the helm for only two years since her husband’s death.

But seeking repayment wasn’t the move of a first-class organization. And if that’s what the Lions want to be — and based on the upgrades that have recently been made to the team’s roster, management, facilities and stadium, that appears to be the goal — this should prove to be a valuable learning experience.