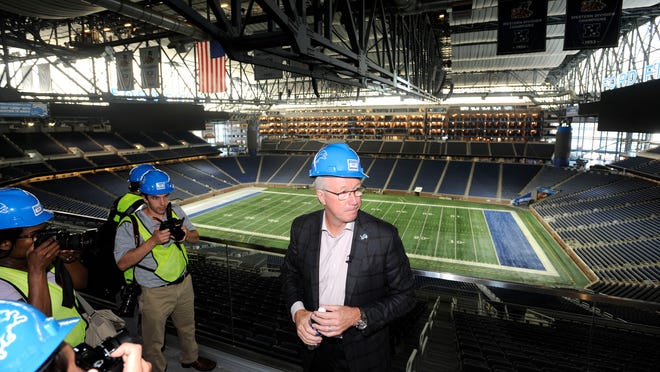 Detroit — A tour showcasing Ford Field’s upgrades Wednesday morning culminated with the lighting of the new video boards in each end zone, massive HD displays approximately triple the size of the previous, outdated versions they replaced.

But as the stadium glowed in a blue hue from the placeholder graphic, there was a notable absence from the building’s interior. Five years after they were unveiled, the Detroit Lions have removed banners celebrating the team’s playoff appearances.

Farewell to a celebration of mediocre accomplishment, a meaningful and necessary step as the organization pushes for a high standard under the leadership of owner Martha Ford, general manager Bob Quinn and president Rod Wood.

“You know, nine wins is a good season, it’s not nearly good enough for what we want,” Quinn said shortly after the season. “Whether you don’t make the playoffs and it’s Week 17 and you go home or you make the wild card weekend like we did and go home, it’s still the same feeling at the end of the day, that the season wasn’t good enough and that’s the bottom line. So our goals are higher and were going to work hard to achieve those goals.”

So when the $100-million renovation project began at Ford Field this offseason, the three banners listing the Lions’ 17 playoff appearances came down and there’s no plans to hang them back up.

“We took them down as part of the renovation and we’d rather just celebrate the next division win and not put them back up,” Wood said. “I’m certainly setting my sights on winning divisions and championships, not just making the playoffs.”

Lions fans are well-versed in the team’s lack of meaningful accomplishment the past six decades, which includes a single playoff victory since Detroit’s last championship in 1957.

The playoff banners lowered the franchise’s bar for accomplishment, glorifying something nearly 40 percent of the league can claim each year.

Their removal leaves a hole in the rafters, but should serve as motivation to achieve more meaningful accomplishments, such as an elusive NFC North crown. Ford Field has been open nearly 15 years and it has yet to host a playoff game.

The Lions have invested heavily in their brand with Wood at the helm. Fans at Ford Field have or will be treated to upgraded lighting, Wi-Fi, video boards and food options. The stadium’s suites have been completely overhauled. The team added cheerleaders last year and will wear new uniforms this season.

The practice facility has also been subject to a number of upgrades, from the weight room and the cafeteria to the indoor and outdoor fields.

Each of those things enhance player or fan experience, in some cases both. But if the organization continues to fail to deliver results on the field, the shine will wear off quickly.

Mercifully, the playoff banners are gone. They were unnecessary reminders of past ineptitude. It’s a small gesture that shows the bar has been raised and it’s about time the Lions delivered.