Lions WR Golladay gets extra work in with Stafford 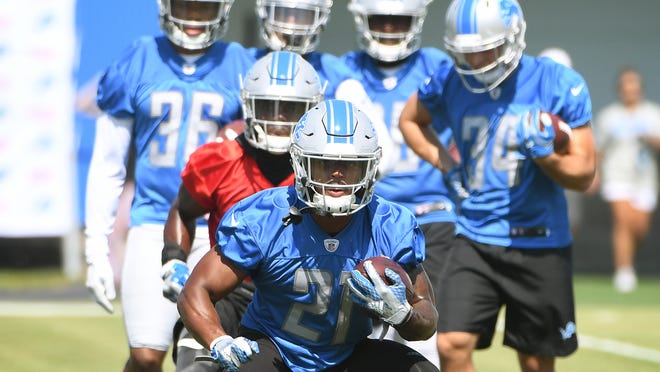 Allen Park — Kenny Golladay is embracing growing expectations and the Detroit Lions rookie receiver is leaning on quarterback Matthew Stafford to help him reach his potential.

After an inconsistent first day of training camp, Golladay sought out Stafford for some extra work after practice.

“We’re still trying to get a feel for one another,” Golladay said. “We actually just got done running a few routes, me, coming to him, asking if he could throw me a few passes I didn’t do as well in practice. I feel like I need to do a little more work. That just goes back to perfecting my craft.”

Last month, during mandatory minicamp, Stafford noted he had a responsibility to help get Golladay up to speed and the rookie receiver made it clear Stafford has embraced the mentoring process.

Lang shakes off rust, ready to fit in with Lions

“What he really said is, ‘Whenever you feel like you need something, you just come to me and I’ve got you,’ ” Golladay said.

Golladay impressed teammates and outside observers with a string of strong practices during the early portion of the offseason program. He’s currently projected to serve as the team’s No. 3 receiver, a role held by Anquan Boldin last season.

“I’ve seen steady improvement,” coach Jim Caldwell said. “He’s got a ways to go yet, but he’s got height, he’s got ability, he’s got the drive and work ethic to try and improve each and every day.

In two seasons at Northern Illinois, Golladay stuffed the stat sheet, catching 160 passes for 2,285 and 18 scores. At 6-foot-4, 218 pounds, he provides the Lions with much-needed size on the outside, something the team didn’t adequately replace after Calvin Johnson’s retirement.