Washington gets on 'highway of love' in Lions debut 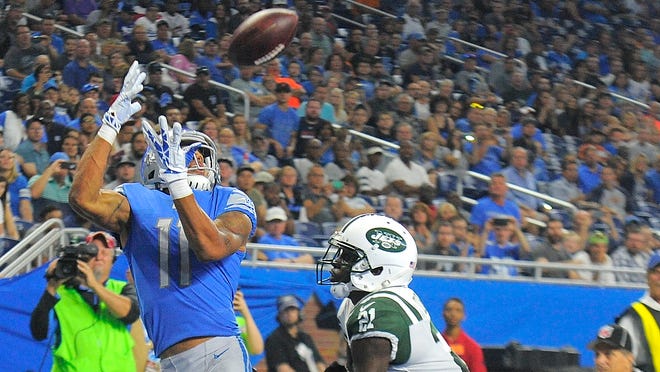 After sitting out the preseason opener against the Indianapolis Colts last week, Washington delivered a bone-rattling sack that highlighted the Lions’ defensive effort in a 16-6 preseason win over the Jets Saturday night at Ford Field.

With the Jets facing a third-and-7 at their own 22-yard line on the opening possession, Washington burst into the backfield untouched and flew right by Jets right tackle Brandon Shell, who offered no resistance on the edge as he helped double-team defensive tackle Haloti Ngata inside.

“(My eyes) got big as grapefruits,” said Washington. “That thing looked like the highway of love to the quarterback, shoot.”

Washington, who got the start opposite Anthony Zettel, leveled an unsuspecting Hackenberg in the backfield for a 12-yard sack and jarred the ball loose, but it was recovered by the Jets to force a fourth down.

“Just pretty much anybody we get in there is going to get doubles and then Ziggy (Ansah) is probably going to get a bunch of doubles, too, so that's going to be little ole me on the other side just cleaning up.”

Washington’s big hit fired up the Detroit sideline and helped spark a string of three consecutive three-and-outs by the Lions’ first-team defense. By the end of the first quarter, the Lions held the Jets to as many total yards of offense (3) as offensive drives.

“That set the tone a whole lot,” cornerback Nevin Lawson said. “That's one of our things is to get sacks and turnovers but that definitely set the tone.”

For Hackenberg, though, it was just one of several forgettable moments in a rather forgettable performance. He finished 2-for-6 passing for 14 yards and was sacked twice for 17 yards.

Yet with a defensive line that has already been dealt a blow with injuries to defensive end Kerry Hyder Jr. (torn Achilles) and linebacker/defensive tackle Brandon Copeland (torn pectoral muscle), it was a glimpse of Washington’s blend of power and speed and a playmaking moment that will help his case for a roster spot.

“I think he’s a heavy-handed sort of physical guy that can not only defend the run, because I think he’ll do a good job there in terms of setting the edge for us. But I think also he’s going to be able to add some pass rush through power,” Lions coach Jim Caldwell said. “He’s not one of those finesse guys. He’s going to take you on and get after you pretty good. And he can collapse the pocket.

“Even though he was untouched in that one, he’s free, that’s still not an easy tackle to make as I think you saw another one of our guys come free in the backfield. We didn’t get him down on the ground. So, it was good to see him doing that, and I just think he’s going to fit in well with what we do. He’s going to just add another element of rush technique that the opposition is going to have to deal with.”

Washington finished with three tackles and plenty of high-fives, but noted he experienced his share of “ups and downs” in his first game action after missing the first couple weeks of training camp with an ankle injury.

“There’s definitely some stuff I need to improve on,” said Washington, who signed with the Lions after spending his first four seasons with the Chicago Bears. “I wasn't really impressing myself as far as setting the edge at times, playing as physical as I needed to be on tight ends. I feel like I left too much space between the tight end and tackle as far as when that cutback comes, but that's just something I need to work on to get back in the swing of things.

“I helped our team tonight, for sure. I think the defense did very well but I just got to get back into the swing of it and keep it rolling from here, just keep stacking days.”