The dress rehearsal is done and the fourth and final preseason game will offer the Detroit Lions a final opportunity to evaluate the players fighting for spots at the bottom of the roster.

The Lions fell behind 24-0, surged back to take the lead, only to fall the Patriots. We discuss the good, bad and ugly from the night.

Allen Park — The dress rehearsal is done and the fourth and final preseason game will offer the Detroit Lions a final opportunity to evaluate the players fighting for spots at the bottom of the roster.

The final preseason game is Thursday at 7 p.m. at Buffalo.

Here is our second projection for how the roster will shake out. A reminder, there’s only one cut day this year. Teams must get down to 53 players by 4 p.m. on Sept 2.

■ Thoughts: Despite an underwhelming performance against the Jets in the second preseason game, Rudock is proving he’s capable to serve as Stafford’s backup. On Friday night against the Patriots, Rudock showed poise and moxie, leading a pair of long touchdown drives to put the Lions briefly ahead of the Patriots.

As for Kaaya, following a strong preseason debut, he hasn’t done much the past two weeks. His best spot will be on the practice squad, where he won’t eat up valuable roster space, with no negative impact on his development in the system.

■ Thoughts: Abdullah is showing no rust after last season’s foot injury, the team is starting to take the bubble wrap off Riddick, and Washington is showing signs of rounding into a nice complement to the backfield rotation.

Zenner didn’t play against the Patriots. He was in uniform on the sideline, but coach Jim Caldwell noted the young back was dealing with a minor injury. As long as it isn’t something that will hinder him going into the regular season, it doesn’t leave room on the roster for Asiata, who has struggled to stand out in any facet since signing with Detroit.

Green should be a nice fit on the practice squad.

■ Thoughts: The presumed race between Abbrederis and Billingsley is as difficult to read as any on the roster. Abbrederis offers more experience and offensive versatility, while Billingsley is a more dynamic return man and open-field weapon, given his ability to take a short throw and turn it into a sizeable gain. Both had moments against the Patriots, leaving the spot up for grabs.

Martin has done a nice job on the practice field, and with his limited opportunities in exhibition games, but hasn’t been able to climb out from the bottom of the depth chart. As for practice squad options, the big-bodied Ford and shifty Thomas are both solid choices.

■ Thoughts: It looks like Wick escaped major injury after having to be helped from the field Friday, but he’s unfortunately not escaping this projection with a roster spot. We’ve dropped the Lions back to three tight ends. Ebron (hamstring) should be ready to go for the regular season and Fells can handle a heavy workload, making a fourth unnecessary.

■ Thoughts: If Corey Robinson were healthy, Kouandjio would likely be out. He hasn’t improved at a sharp enough clip to merit the job. But neither has Norton, the undrafted rookie out of Toledo, and the Lions aren’t likely to roll into the season with just three tackles on the roster.

Thomas is making a bit of a push, but contractual factors make it difficult to put him ahead of Tomlinson.

Lions running back Ameer Abdullah is brought down by Patriots linebacker and former Detroit Lion Kyle Van Noy in the first quarter of a preseason game on Friday, August 25, at Ford Field. The Patriots won, 30-28, on a field goal in the final seconds. Daniel Mears, Detroit News
Fullscreen

Detroit Lions players come out of the tunnel for the preseason matchup against the New England Patriots. Daniel Mears, Detroit News
Fullscreen

Lions quarterback Matthew Stafford tries to get the line arranged at the line in the first quarter. Daniel Mears, Detroit News
Fullscreen

Patriots' Patrick Chung collides with Lions' Cole Wick for an incompletion that sent Wick off the field with an injury in the second quarter. Daniel Mears, Detroit News
Fullscreen

Lions' Matthew Stafford goes off the field after an incompletion on third down in the second quarter. Daniel Mears, Detroit News
Fullscreen

Lions' Marvin Jones Jr. bobbles the ball along the sidelines with Patriots' Eric Rowe defending. The reception was called out of bounds after the review in the second quarter. Daniel Mears, Detroit News
Fullscreen

Lions cornerback Nevin Lawson walks out of the end zone after Patriots' Chris Hogan made a touchdown reception over Lawson. It was Hogan's second touchdown of the first quarter. Daniel Mears, Detroit News
Fullscreen

A league-worst 31 percent of the Lions' rushing attempts have resulted in no gain or lost yardage this season Daniel Mears, Detroit News
Fullscreen 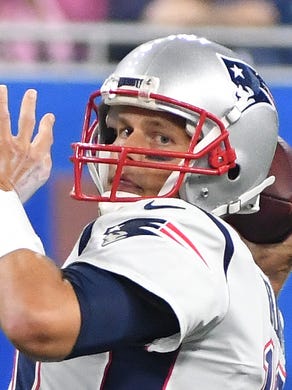 Lions' Jalen Reeves-Maybin jumps up after getting a good hit on Patriots' D.J. Foster in the fourth quarter. Daniel Mears, Detroit News
Fullscreen

Lions running back Matt Asiata breaks up field for a gain in the fourth quarter. Daniel Mears, Detroit News
Fullscreen

Patriots' Rex Burkhead catches up to Lions' Jace Billingsley, who picks up a big gain just short of the end zone, in the fourth quarter. Daniel Mears, Detroit News
Fullscreen

Patriots kicker Stephen Gostkowski kicks a field goal to put them within one in the fourth quarter. Daniel Mears, Detroit News
Fullscreen

Evan Matsson, 13 of Sarnia, Canada, shows his Patriots pride as he watches warmups before the game between the Lions and Patriots. Daniel Mears, The Detroit News
Fullscreen

Patriots quarterback Tom Brady warms up on the field before the preseason game against the Lions at Ford Field. Daniel Mears, The Detroit News
Fullscreen

■ Thoughts: The Patriots get rid of the ball so quickly that it makes it difficult to evaluate the pass rush, but Barrett continues to show up as a potentially potent edge defender on film. If the Lions opt to carry five defensive ends, a realistic possibility given the youth of their depth, Valaoga’s body of work remains slightly better than O’Connor’s this offseason.

Ledbetter’s spot had been tenuous. The team didn’t need a fifth defensive tackle, and despite showing some athletic flashes, he’s wasn’t on Spence’s or Hill’s level. But with Hill out for the year after suffering a bicep injury, it’s an easy choice to keep the rookie with intriguing upside.

A guy to watch this final week is Ego Ferguson. The veteran has experience and tallied four tackles in the fourth quarter against the Patriots. He could sneak his way into a job with Hill out.

■ Thoughts: With a developing knack for showing up on special teams, and the season-ending injury to Copleand, there’s a spot for Longa on the roster. Always around the ball during his college career, he’s also made strides in the defensive scheme, in case injuries higher up the depth chart force him into the mix.

■ Thoughts: Nothing has changed with the cornerback projection. The team has a lot of depth at the position, and given the number of injuries that accumulate at the position, that could prove valuable.

■ Thoughts: Few players have received a longer look this offseason than Washington, a highly athletic safety who spent last season on the practice squad as an undrafted rookie out of Fresno State. He has the makings of a strong contributor on special teams, and would back up Quin, in the unlikely scenario the starting safety’s lengthy streak of durability comes to an unexpected end.

■ Thoughts: Two weeks after our initial projection, there’s still no indication Martin will be ready for the season after suffering an ankle injury during the team’s summer break. The good news is Martin was spotted at Ford Field Friday night without his walking boot. That’s progress, but who knows how long it will be before his kicking leg is full strength.

If Martin isn’t ready to go by the start of the regular season, Redfern looks to be a competent short-term replacement.