The Lions didn’t buckle, moving to 2-0 on the season with a 24-10 win over the New York Giants on Monday night.

Lions rookie Jamal Agnew runs back a punt 88 yards for a touchdown down the New York Giants sideline in the fourth quarter of the 24-10 Detroit victory at MetLife Stadium in East Rutherford, New Jersey on Monday, September 18, 2017. Daniel Mears, Detroit News
Fullscreen

Lions quarterback Matthew Stafford breaks out of the pocket and runs for a first down on third down in the first quarter. Daniel Mears,Detroit News
Fullscreen

Lions' Darius Slay poses for pictures by teammate/photographer Tavon Wilson after Slay picked up a fumble in the end zone but sadly, the play was overturned when Giants quarterback Eli Manning's knee touched the ground before fumbling in the second quarter. Daniel Mears, Detroit News
Fullscreen

Lions kicker Matt Prater is all smiles after his long field goal that bounced off the bottom bar in the second quarter. Daniel Mears, Detroit News
Fullscreen 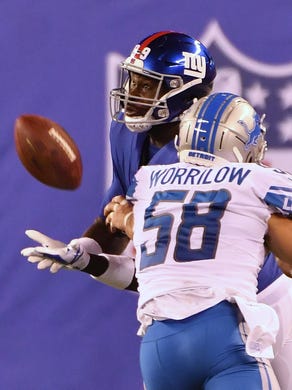 Lions running back Theo Riddick vaults over a Giants defensemen on a run in the third quarter. Daniel Mears, Detroit News
Fullscreen

The Lions' Ezekiel Ansah knocks the ball away from Giants quarterback Eli Manning, but New York was able to recover in the third quarter. Daniel Mears, Detroit News
Fullscreen

Lions fans begin to chant as Giants fans head to the door late in the fourth quarter. Daniel Mears, The Detroit News
Fullscreen

Lions' Jamal Agnew runs back a punt for a touchdown down the Giants sideline in the fourth quarter. Daniel Mears, Detroit News
Fullscreen

The Lions' Jamal Agnew runs back a punt 88 yards for a touchdown in the fourth quarter. Daniel Mears, Detroit News
Fullscreen

Lions rookie linebacker Jarrad Davis leaves the field after getting hit hard and leaving the game, not to return, in the fourth quarter. Daniel Mears, Detroit News
Fullscreen

Lions running back Theo Riddick heads up field, gaining yardage and burning off precious seconds on the clock late in the fourth quarter. Daniel Mears, The Detroit News
Fullscreen

Lions defensive end Ezekiel Ansah, who had multiple sacks in the game, slaps hands with fans as he leaves the field with a 24-10 victory over the Giants. Daniel Mears, Detroit News
Fullscreen

Lions tight end Eric Ebron takes in the cheers of a small but vocal group of Detroit fans as the players left the field. Daniel Mears, Detroit News
Fullscreen

Lions quarterback Matthew Stafford leaves the field with a 24-10 victory over the New York Jets, putting Detroit at 2-0 for the season. Daniel Mears, Detroit News
Fullscreen

Giants' Odell Beckham Jr. warms up before the game, moving like he is ready to play some football. Daniel Mears, The Detroit News
Fullscreen 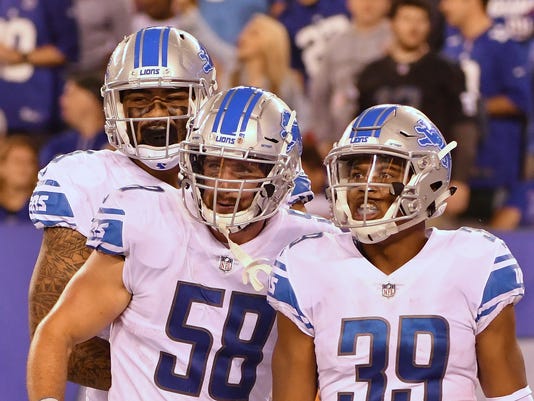 East Rutherford, N.J. — Under the bright lights in the big city, and in front of a national television audience, the Lions didn’t buckle, moving to 2-0 on the season with a 24-10 win over the New York Giants on Monday night.

The Lions got major contributions from all three phases in the victory. Quarterback Matthew Stafford had a quiet, but efficient night, completing 15 of 21 for 122 yards, two touchdowns and no interceptions. The defense generated a turnover, five sacks and two fourth-quarter stops. And punt returner Jamal Agnew delivered the knockout blow with an 88-yard touchdown return early in the fourth quarter.

“Yeah, almost in every phase we got a huge contribution,” Lions coach Jim Caldwell said. “I just think all across the board the guys played tough and played well against a team that’s very difficult to beat anywhere, home or away.”

Detroit got on the board early when Stafford connected with Marvin Jones on a 27-yard pass down the right sideline. The third-down throw was short, but Jones adjusted, coming back to the ball, easily beating second-year cornerback Eli Apple. The Lions converted three third downs on the scoring drive.

“I have a lot of trust in him,” Stafford said about Jones. “He came close a couple times tonight. I missed him early in the game, it felt like a yard or two, and then again later in the game. We’ll continue to take shots, be aggressive and, hopefully, we’ll hit a couple more of them.”

The Giants responded with an eight-play, 75-yard drive. Quarterback Eli Manning was sharp, completing all six of his throws, capped by an 18-yard touchdown to rookie tight end Evan Engram. The Lions lost Engram in coverage, as he ran up the gut from a backfield alignment after safety Tavon Wilson and linebacker Tahir Whitehead bit hard on play-action.

“Had a good play call, had some play-action,” Manning said. “I think they may have screwed up the coverage anyway, but they sucked up on the play-action, was able to get him up the middle.”

The teams traded turnovers before the Lions regained the lead. Stafford coughed up a fumble when he was sacked by Jason Pierre-Paul. A trailing Giants player clipped the front of Stafford’s face mask on the play, but no penalty was called.

But the Giants gave it right back when Manning threw behind his intended target, only to see the pass deflected by Lions safety Glover Quin and intercepted by Whitehead.

Five plays later, the Lions were back in the end zone, when Stafford stepped up in the pocket and found tight end Eric Ebron on a crossing route from 7 yards out.

Ebron paced the Lions with five catches for 42 yards and the score.

“Eric had a pretty good day with five receptions, but that’s just kind of how our offense works,” Caldwell said. “Next week it may be somebody else and that’s the good thing about it.”

The Lions tacked on three more before the half when Matt Prater’s 56-yarder deflected off the crossbar, popped up in the air and just trickled over. It marked his 36th make from 50 yards or more in his career, moving him into a tie for sixth on the all-time list, one behind Jason Elam.

The Giants got back within one score in the third quarter, settling for a 25-yard field goal after stalling out in the red zone, but the Lions put the game away shortly after with Agnew’s punt return.

The rookie had to backtrack for the booming 60-yard boot, and went a step too deep, forcing him to snag it off his shoetops. After making the first man miss, he spun through a tackle attempt then easily juked past punter Brad Wing and into the end zone.

“To be honest, what was going through my mind was, ‘Don’t let the long snapper tackle me and don’t let the punter tackle me,’” Agnew said. “Thankfully, I made them miss. I have to shout out the punt return squad, they all held their blocks and it was a team effort.”

Detroit’s defense did the rest, twice stopping the Giants on fourth down in the fourth quarter. Cornerback Quandre Diggs came up with one of the stops near midfield, making a quick and decisive tackle after a completion. The officials initially awarded the Giants the first down, but the spot was overturned after the Lions challenged.

“I was standing right in front of it, so it was pretty simple,” Caldwell said.

Ziggy Ansah led Detroit’s defensive charge with three sacks, besting his output for the 2016 season in one night. And running back Ameer Abdullah slogged through some early-game struggles to break a pair of long runs, finishing his night with 86 yards on 17 carries.

The Lions will return home to battle the defending NFC champion Atlanta Falcons (2-0) next week. The Falcons topped the Green Bay Packers over the weekend, 34-23. Given the short week of preparation, the Lions admittedly have already begun their work on the matchup.

“We’ve had a look at a little bit of film here in terms of our preparation,” Caldwell said. “They’re a very talented team, very explosive, which you can see, and so it should be a real challenge for our guys.”