The Lions reportedly have agreed to terms with linebackers Devon Kennard and Christian Jones. 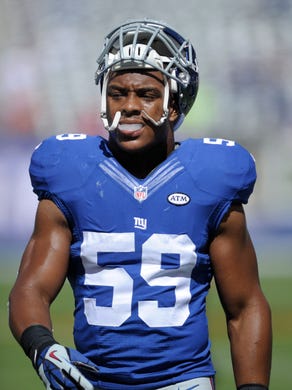 Devon Kennard was born in Phoenix and is 26 years old. He will turn 27 in June. Steven Ryan, Getty Images
Fullscreen

Devon Kennard has played in 52 games for the Giants over the last four seasons. Rob Carr, Getty Images
Fullscreen

In 2017, Devon Kennard had 41 tackles and four sacks for the Giants. Al Bello, Getty Images
Fullscreen

Devon Kennard was rated a five-star prospect and the No. 1 defensive end in the country coming out of Desert Vista High in Phoenix in the 2009 recruiting class. Adam Hunger, AP
Fullscreen

Devon Kennard graduated from USC in 2012 with a degree in communications. Michael Ainsworth, AP
Fullscreen

Devon Kennard is the son of Derek Kennard, who played in the NFL with the Cardinals, Saints and Cowboys. AP
Fullscreen

Christian Jones was signed by the Bears as an undrafted free agent in 2014. Stacy Revere, Getty Images
Fullscreen

Christian Jones’ most productive NFL season was 2017, when he had 90 tackles. Jonathan Daniel, Getty Images
Fullscreen

Christian Jones was rated a five-star recruit and the No. 2 outside linebacker in the country in 2010 coming out of Lake Howell High. Nam Huh, AP
Fullscreen 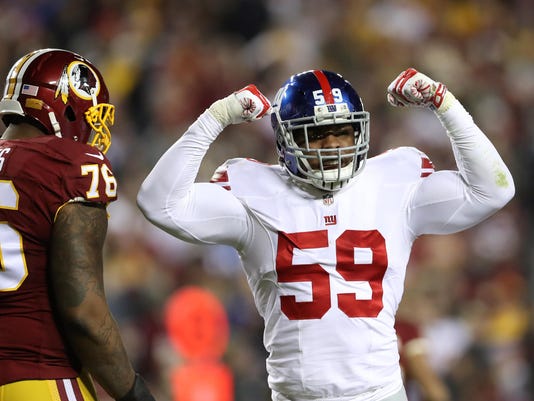 Allen Park — The Detroit Lions reportedly have made their first splashes in free agency, agreeing to terms with a pair of linebackers, Devon Kennard and Christian Jones

Fox Sports is reporting Kennard will ink a three-year deal, worth $18.75 million. Jones’ pact will be two years, according to ESPN.

Text messages to the Lions and the players’ representatives were not immediately returned.

A fifth-round draft pick out of USC in 2014, Kennard has spent the past four seasons with the New York Giants. He’s appeared 52 games, starting 35, racking up 203 tackles, 9.5 sacks, eight pass defenses and three forced fumbles.

Unlike a traditional 4-3 linebacker who plays off the ball, the Giants primarily used the 6-foot-4, 256-pound Kennard, 26, as an edge rusher in 2017. He would give the Lions a versatile piece for the new defensive scheme being installed by Matt Patricia.

Jones also came into the NFL in 2014, signing with the Bears as an undrafted free agent out of Florida State. He’s missed just one game in his four-year career, starting 11 of 16 last season while recording a career-high 90 tackles.

Both Kennard and Jones also played key special teams roles for their clubs. Jones played 233 special-teams snaps last season, the third-most on Chicago’s roster, while Kennard was on the field for 143 special-teams plays.

The additions likely signal an end for Tahir Whitehead’s tenure with the Lions. The sixth-year linebacker, and team’s leading tackler the past two seasons, has spent his entire career with the team after being selected in the fifth round out of Temple in the 2012 draft.