The 6-8, 265-pounder had spent his entire five-year career with the the Falcons. 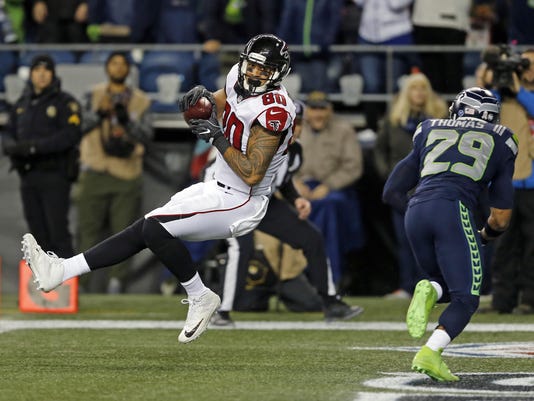 Levine Toilolo had his most productive season in 2014, catching 31 passes for 238 yards and two touchdowns.(Photo: Stephen Brashear / Associated Press)

Orlando, Fla. — The Lions are adding another veteran tight end to the roster, according to multiple reports, agreeing to terms with Levine Toilolo. He had visited with the team last week.

A fourth-round pick out of Stanford in 2013, Toilolo has spent his entire five-year career with the Atlanta Falcons. The 6-foot-8, 265-pounder had his most productive season in 2014, catching 31 passes for 238 yards and two touchdowns.

Toilolo will join a revamped position group, which includes another free agent addition, Luke Willson, along with Michael Roberts, a fourth-round pick in 2017 returning for his second season.

On Tuesday, Lions coach Matt Patricia highlighted the team’s need for a tight end, foreshadowing the addition of a player like Toilolo.

“I would say right now if we had to go line up and play, we’re probably short maybe at the tight end position,” Patricia said when asked his team’s biggest need. “Try to get another body in there if we can from a free agency standpoint.”

The Lions released former first-round pick Eric Ebron earlier this month in a cost-saving move. He was due $8.25 million this season had the team retained him. Additionally, Darren Fells departed via free agency, agreeing to a three-year contract with the Browns.