Lions' Ragnow puts fishing show on back burner — for now

Avid fisherman might even recognize Frank Ragnow and his brother, Jack, who have a YouTube program called “Grizzly Man Outdoors.”

Lions' Ragnow puts fishing show on back burner — for now 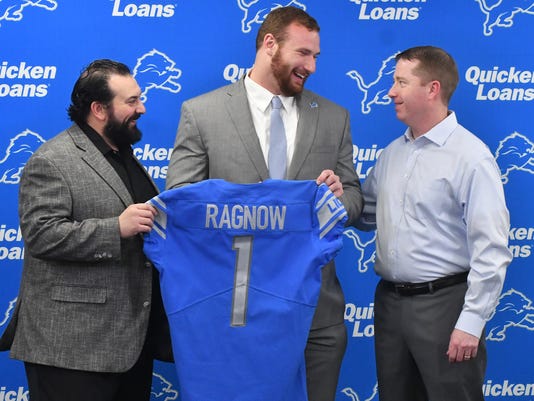 Allen Park — Whether Frank Ragnow turns out to be the perfect fit for the Detroit Lions remains to be seen, but landing in the state of Michigan certainly didn’t come with any complaints.

The Lions made the center from Arkansas their first pick in the 2018 NFL Draft on Thursday night, and he was at the Lions’ facility Friday to get used to his new home and meet with the media.

“I am so, so, so excited to be here,” Ragnow said. “Dream come true and I couldn’t be more happy to be part of Detroit and be under Coach (Matt) Patricia. Just really excited to get to work.”

Ragnow, who can play center or guard, seems like the right choice for the Lions. There is even less doubt that he’ll fit in well living in Michigan. The native of Victoria, Minn., is an avid outdoorsman, making his new home the perfect place for him to land.

Avid fishermen might even recognize Ragnow and his brother, Jack, who have a YouTube channel called “Grizzly Man Outdoors.” It’s nothing fancy, mostly a chance for the brothers to share their love of fishing with whoever might choose to watch. But it’s a passion for the Ragnow brothers, something they hope to turn into something more when Frank Ragnow is done playing football.

“It’s kind of just a fun deal,” Ragnow said. “But me, my dad and my brother, we’ve always grown up loving the outdoors, whether it’s fishing or hunting. We’ve always kind of had this plan that I want to play in the NFL as long as I can. And then after that, maybe we have our own fishing show.”

Michigan would seem to be the perfect place for Ragnow to continue his hobby. The state has 150 species of fish, 3,000 miles of Great Lakes shoreline, tens of thousands of miles of rivers and streams, and 11,000 inland lakes.

“From what I’ve heard, it’s a great spot,” Ragnow said. “I couldn’t be more excited. Some great fishing and hunting around here, so I’m really excited to be here.”

The love of fishing that Ragnow and his brother have was passed on from their father, Jon, who died of a heart attack in October 2016. The brothers decided at that point they were determined to keep putting together episodes for the show.

It’s been hard to keep it going consistently as Ragnow finished his career at Arkansas, but it’s something they won’t let fade away.

“After he passed away, me and my brother kind of really took it on ourselves to kind of try to keep it going,” Ragnow said. “I mean, it’s really nothing but an Instagram page now, but who knows where it can go. I got a lot of other things on my plate right now to worry about. But it’s just kind of fun, maybe have a fishing show when I’m done with football. But that’s about it.”

While Ragnow hopes to someday hold up the ultimate trophy in professional football with the Lions, he’s had his share of keepers on the water.

“Probably a 40-plus inch Muskie,” Ragnow said. “I have a cabin up in Canada that’s pretty good fishing.”

There’s pretty good fishing in Michigan, too, and Ragnow is hoping it comes with some good football, as well.

Running back Kerryon Johnson, the Lions’ second-round pick, already knows what he’s in store for when it comes to adjusting to the weather in Detroit.

The native of Huntsville, Ala., who was named SEC Offensive Player of the Year last season after running for 1,391 yards and 18 touchdowns at Auburn, is close friends with Michigan State basketball player Joshua Langford. They’ve had plenty of discussions about life up north, something Johnson said Langford enjoys.

“I’ve known Josh forever,” Johnson said. “So, obviously, he told me about the weather up there and he loves it up there. Ever since he moved up there, he’s loved it up there. Now we’ll be much closer to each other and actually will get to see each other.”

Langford, also from Huntsville, has worked with Johnson’s father, Kerry, who runs a business that specializes in training basketball players. Langford just completed his sophomore season at Michigan State.

The Lions selected Arkansas center Frank Ragnow with the No. 20 pick in the NFL Draft on Thursday night. Samantha Baker, AP
Fullscreen 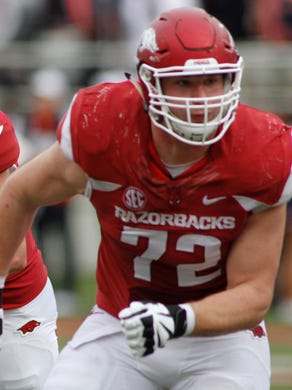 Frank Ragnow is a 6-foot-5, 312-pound center who played in nine of Arkansas' 12 games as a freshman. Michael Woods, AP
Fullscreen 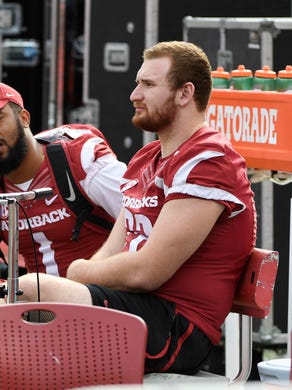 Frank Ragnow missed only 43 offensive snaps prior to his season-ending injury in the seventh game of 2017. Michael Woods, AP
Fullscreen