Trevor Bates could be Lions' answer to replacing Steve Longa

Longa led the Lions with 11 special-teams tackles last season. Bates has four for Detroit this preseason.

Trevor Bates could be Lions' answer to replacing Steve Longa 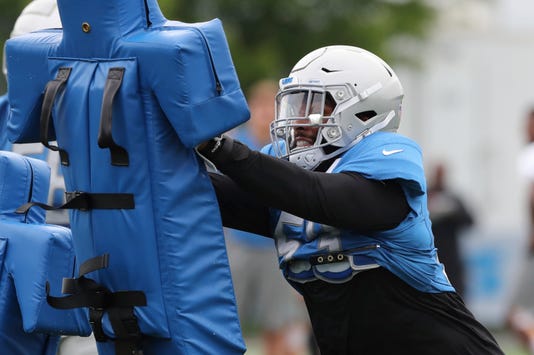 Allen Park — The Detroit Lions have largely been able to avoid catastrophic injuries this offseason, but were dealt a blow when linebacker Steve Longa suffered a torn ACL last week against the Giants.

Longa played just 14 defensive snaps last season — after spending the previous year on the team's practice squad — but his impact on special teams can't be understated. He was one of four Lions to play more than 300 special teams snaps in 2017 and led the team in special-teams tackles with 11.

With Longa out, and Don Carey leaving via free agency, the Lions are down their top two special-team stoppers from a year ago and must find someone to step up and fill the gap.

Bates, like Longa, plays linebacker. That makes him a natural fit to compensate for the loss without altering Detroit's roster balance.

A seventh-round pick out of Maine in 2016, Bates joined the Lions in May, reconnecting him with Lions coach Matt Patricia, who he played for as a member of New England's practice squad last season.

Bates has a good combination of size (6-foot-2, 247 pounds) and speed. He showed his ability to make plays on special teams by forcing a fumble on a kickoff return against the Giants.

"He had a real nice play early in the game if you guys saw that, when he kind of came down, set the edge," Patricia said. "That was him that actually got the ball out in that particular case, which is a hard thing to do. You have blockers coming at you, set the edge of the defensive play or the coverage team, and then still (had) enough recognition to get the ball out or poke at the ball there with his arm.

"I would say his attributes that help him on special teams are his ability to play in space, his strength, and really his overall knowledge of the game helps him play faster and helps him really recognize a lot of things."

On defense, Bates' understanding of the scheme has been a valuable resource to teammates during the installation phase this offseason.

"He’s obviously been in the system before and having some familiarity with myself and some of the terminology and the communication, it’s really good," Patricia said. "And I think what he does a good job of is kind of settling some of the players around him down, just the recognition and the communication standpoint where he can just get it out. It’s very second nature to him and I think that helps everybody else play, too."

But special teams will be Bates' ticket to a roster spot. He's certainly made an impact so far this preseason. Beyond the fumble recovery, he's been a four-phase contributor and recorded tackles on four of his eight plays on kick and punt coverage.