For the Lions who do take the field against the Browns on Thursday, they’ll still be battling like their livelihoods depend on every snap. 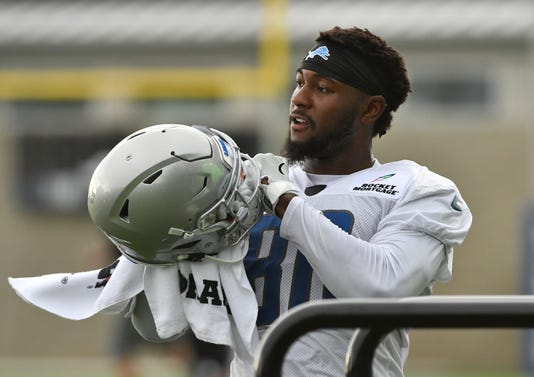 Lions tight end Michael Roberts could be in a fight for a roster spot entering Thursday's preseason finale against the Browns.(Photo: Daniel Mears, Detroit News)

Allen Park — In the grand scheme of things, almost all of the decisions have been made. Most NFL coaches and general managers aren’t going to publicly admit that, but with a single preseason game remaining, the shape of the roster has pretty much been decided.

You can count the number of roster spots the Detroit Lions have up for grabs on one hand, maybe even one finger, when the team hosts the Cleveland Browns on Thursday night.

But just because the Lions’ brass knows doesn’t mean the players know. And it doesn’t mean we, both media and the fans, can be certain, either, regardless of our sources. At the very least, a handful of jobs appear to be up in the air — from backup quarterback to the fifth wide receiver, if the team even keeps one, to the third tight end or final linebacker, defensive lineman or defensive back.

For the players who do take the field against the Browns, they’ll still be battling like their livelihoods depend on every snap.

“I don’t really know what they have planned, the situation upstairs. I just come to work and fight for my life each day,” Lions tight end Michael Roberts said.

Roberts will be one of the most interesting players to monitor Thursday. A fourth-round pick a year ago, he appeared primed for a breakout season after a string of impressive practices early in the offseason carrying into the start of training camp.

But his momentum seemed to be derailed by a camp injury that kept him out of practice a few days, and he hasn’t been able to translate his early success into the games.

“It’s not in my control. If I (thought about my job security), I would drive myself crazy,” Roberts said. “When my time does come, the ball comes my way consistently, everyone will start to see, start to notice what I really have to give. Honestly, they haven’t seen anything. It’s been kind of quiet.”

More: Patricia not worried about Lions' preseason numbers: 'There is definitely a flow to this'

Those balls have been going the way of teammate Hakeem Valles, who has made a strong push for a job and will look to put an exclamation point on his offseason resume against the Browns.

Valles has seven catches for 69 yards in three games, and last week against the Tampa Bay Bucs, was given an extensive look on special teams, a strong indicator the coaching staff is assessing your fit on the 53-man roster.

“Yeah, I’m putting everything out there to the best of my ability,” Valles said. “They say don’t try to emulate anybody, just try to do what you’re best at. I feel like I’ve done that.”

Most of the players interviewed this week allowed themselves to think ahead to Saturday, the day the team has to trim the roster from 90 to 53. Quarterback Jake Rudock, who is locked in a roster battle with veteran Matt Cassel, said that’s a normal mindset for football players.

“That’s a football thing,” Rudock said. “Guys in this locker room, they’ve learned that over time to stay in the moment, stay in the here and now and don’t worry about the future.”

Running back Ameer Abdullah, who has had an extended opportunity to show he still deserves a roster spot following the offseason additions of LeGarrette Blount and Kerryon Johnson, echoed Rudock’s sentiments. 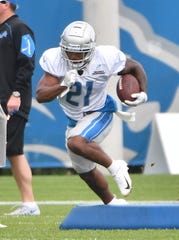 Lions running back Ameer Abdullah's roster spot could be in jeopardy after the addition of LeGarrette Blount and Kerryon Johnson in the offseason. (Photo: Daniel Mears, Detroit News)

“Right now, my mindset is on tomorrow, getting things more broken down and narrowed down on Cleveland,” Abdullah said. “I’m not really here to say I’ll be on the roster, because that’s out of my control and that’s something that’s next week. I can’t control the future.”

But before we dismiss the fourth preseason game as an annoying speed bump on the way to the regular season, remember, a big performance in the seemingly meaningless game can be the difference.

“There’s no doubt that even with all the evaluation that we do through the spring, and through practice and even practicing against other teams, for some of these guys, we’re trying to see what it looks like in an actual game atmosphere,” Lions coach Matt Patricia said. “What does it look like when the lights come on, when there is a little bit of a pressure from that other opponent, the winning and losing, and the aspect of performing under pressure and all that stuff?”

Former Lions coach Jim Caldwell used to reference a seven-catch, 132-yard performance by receiver Blaire White leading to a job (even though he started that season on the practice squad). For Patricia, he remembers defensive lineman Dan Klecko showing the coaching staff what he was capable of doing late in the preseason. And for Lions fans, they should be able to remember Kerry Hyder’s three-sack showing in the finale, thrusting him onto the roster the year he lead the team in sacks during the regular season.

Kickoff for the Lions and Browns is scheduled for 7 p.m. at Ford Field. The Lions open the regular season against the New York Jets on Monday Night Football, Sept. 10.