Rogers: Expectations are high, but where will Matt Patricia take Lions?

After the team’s fourth and final preseason game, Lions coach Matt Patricia dropped what sounded like an unwelcome warning during his postgame podium session.

Rogers: Expectations are high, but where will Matt Patricia take Lions? 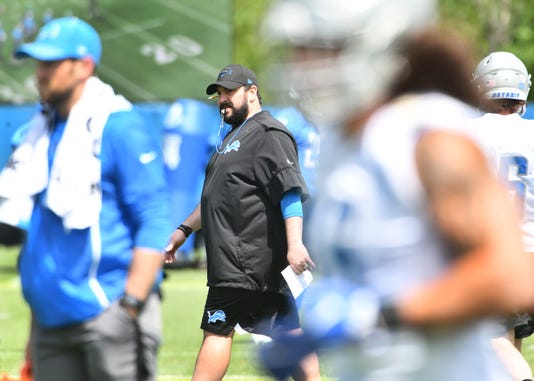 Allen Park – They were curious words, strung together in a way no Detroit Lions fan wants to hear. After the team’s fourth and final preseason game, a thumping at the hands of the Cleveland Browns, Lions coach Matt Patricia dropped what sounded like an unwelcome warning during his postgame podium session.

“You know, those guys are out there working real hard and that’s a positive from my standpoint,” Patricia said. “You know, they’re trying to do it the right way. They’re trying to improve. They understand that this is a long journey. This isn’t a sprint that’s going to take place overnight.

Patricia wrapped up his press responsibilities that evening before clarifying the comments, leaving the stinging statement to simmer with a fan base weary of walking alongside this franchise on one of the longest, most painful journeys is professional sports – 25 years without a division title, 27 without a playoff win and 61 without a championship.

More: Niyo: After five seasons, Lions' Ansah still has much to prove

Patricia isn’t your average first-year head coach. He enters his position with the Lions with loftier expectations than his peers, handed the keys to a more-capable and established roster than most others in his position.

The Lions finished 9-7 the past two seasons. They have a talented franchise quarterback in Matthew Stafford who is durable and among the league’s best in late-game situations. The team also returns a pair of 1,000-yard receivers and has a resource-rich offensive line that, on paper, should be pretty good.

On defense, Patricia inherits an All-Pro cornerback, a defensive end and safety with Pro Bowl resumes, and a recent first-round pick at middle linebacker, a key position for the coach’s defensive scheme.

And in his first offseason with the team, working side-by-side with general manager Bob Quinn -- a pairing that has deep roots going back to more than a decade’s worth of shared experiences in New England -- Patricia has been afforded the opportunity to put his stamp on the roster.

There are 20 new players to start this season, with the most significant changes coming to the defensive front seven, where the scheme requires the most aggressive overhaul.

Quinn made it clear, when he fired Jim Caldwell in January, above-average isn’t good enough. He didn’t like his team’s toughness in 2017 and hasn’t been happy the Lions often fall short on the road and against quality opponents.

Patricia’s addition has been held up as the catalyst that will push the team to the next level. At one point this offseason, team president Rod Wood, who was heavily involved with the hiring process, called Patricia the NFL’s best offseason addition.

Expectations are raised and anything less than improvement from the previous two years would not just be a disappointment, it’s been set up to be viewed as failure.

Outside of a second-half surge by the backups in third preseason game, the Lions looked discombobulated throughout the exhibition slate. At this point, we should be conditioned to know that doesn’t mean anything, especially since the Lions went 4-0 the preseason before 0-16.

Still, even as Patricia acknowledged these contests were more about situational player evaluation than scoring victories, doubt has a way of working its way into our minds.

Not that that’s fazing Patricia.

“I think external expectations, they are what they are,” he said. “I can’t control them, there are probably a lot of people outside this building that have no idea what goes on inside the building, from that standpoint.”

On Monday, Patricia and the Lions’ journey begins for real, in front of what's sure to be a raucous home crowd at Ford Field, appropriately in the spotlight of national television.

And while no one is going to admit it, the league’s schedule makers served the first step up on the silver platter. Monday’s opponent, the New York Jets, are coming off a 5-11 season and are starting a rookie quarterback. It’s also an opponent Patricia knows intimately, having prepared for the AFC East rival twice a year for 14 seasons in New England.

All eyes will be on Patricia, a brilliant coach with a reputation for making expert-level in-game and in-season production. And undeniably loyal Lions fans are optimistic for what the coach has in store, hoping this new adventure leads to the division titles, playoff wins and a Super Bowl this city has long craved.

Records: Season opener for both teams