Two days after the Detroit Lions’ 48-17 loss to the New York Jets, head coach Matt Patricia still was getting questions about the team’s many foibles.

Detroit Lions coach Matt Patricia was asked if this job more difficult than he expected. The Detroit News 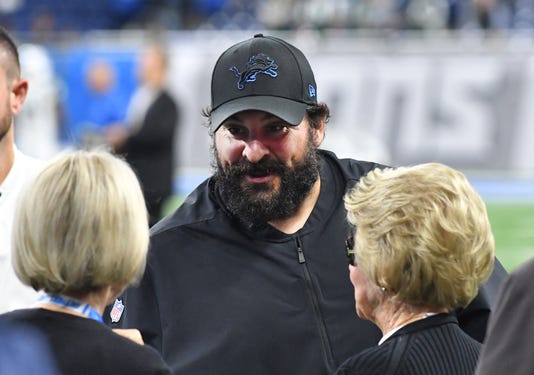 Allen Park — Two days after the Lions’ embarrassing 48-17 loss to the New York Jets, head coach Matt Patricia still was getting questions about the team’s many foibles in the season opener.

It was Patricia’s first game in his first season but because of the way things shook out, with the Jets scoring the final 31 points of the game, there’s already an uneasiness about where the Lions’ season is going.

There were no knee-jerk reactions Wednesday, with Patricia and the players looking to turn the page to this week’s opponent, as the Lions have a tough West Coast trip to face the San Francisco 49ers on Sunday. Because of the Monday night game, the Lions have a shorter week to prepare, with the added task of having to correct their issues in one fewer day.

“That’s the thing about football. You just learn and you train yourself. Every week is different and every week you have to start over,” Patricia said Wednesday. “You can’t let one week bleed into another week. You have to learn and unfortunately on a very short week, you have to learn quickly.

“We have to refocus our energy and get ready for the 49ers.”

Like the Lions, the 49ers lost their opener, but with the Lions’ tough start to the schedule and the 31-point losing margin, the players are aware of the hole that losing the first two games can present.

Safety Glover Quin has seen the up-and-down nature that fans can sometimes fall into based off good and bad performances but won’t let one game to dictate too much about the season.

For Patricia, the solution isn’t simply benching players who made mistakes or didn’t perform up to their potential. There were no announcements of changes; rather, it was a commitment to fixing the issues and moving forward.

Matthew Stafford threw four interceptions and had a forgettable outing, but he sees that those games can happen — the key is learning from the mistakes and then moving on to the next game.

“As far as any of that big-picture stuff, I’m not worried about that. I’m worried about the guys in our locker room, our coaching staff and everybody is doing everything we can to get on the right page and get a win.”

One game doesn’t make a season, but if the opener was any indication, the Lions will have to clean up a lot of their errors to turn things around. The big plays the Jets used to go on their second-half scoring run were deflating, but with one less day to prepare, the Lions won’t have as much time to make fixes.

“It’s a long season. We have to improve from Week 1 to Week 2 and have to play cleaner as a defense and tackle better,” Quin said. “All the things you see in Week 1, we have to speed up the process in Week 2.”

It’s been one week and one game, but the focus has been on Patricia and his tactics. Reports from the NFL Network suggested that players were unhappy with some of the new rules and style that Patricia has implemented and how they’re going over in the locker room.

Patricia was asked Wednesday whether the job as head coach was harder than he anticipated.

“No, this job is great. I’m very blessed to be in this job. I think everything is good. Coming to work every day, we all have different challenges that we face and we got into it and that’s the fun part about it,” Patricia said. “Football is a great sport and I enjoy what I do every single day.

“I love this game, so I don’t really know what the question is there.”

With Monday night’s loss, the Lions don’t have much time to go back and figure out what they did wrong; instead, they have to stay on schedule and get ready for Sunday’s matchup. There’s some looking back to learn, but not much time for reflection.

“We’re not going to accept how we played the other night and we’re going to all get better; we’re going to move on,” Patricia said. “The best thing we can do is turn the page and get ready for the next opponent. There is a timeline to every week, unfortunately for us that we have to stay in to be successful that week. If we get that timeline thrown off, we can get behind.”

Records: Both teams are 0-1