Lions' Tate stung by boos, but empathetic to fans' frustrations

Golden Tate knows the Lions' history, and knows the passion and hopes of the fan base, so, yeah, he gets why they boo the team.

Lions' Tate stung by boos, but empathetic to fans' frustrations 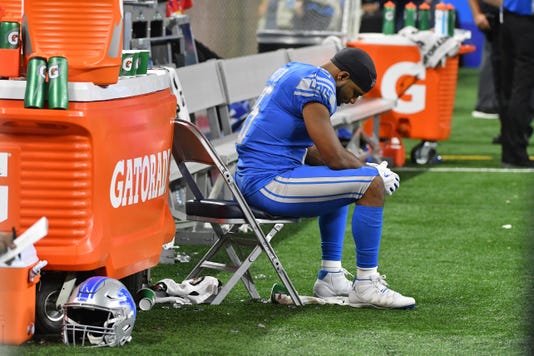 Allen Park — Maybe it’s for the best, but many Detroit Lions players and coaches try to be tone deaf to the crowd’s reactions during a game.

The crowd made it difficult Monday night, as the boos repeatedly rained down from the stands at Ford Field — at least until the New York Jets faithful, easily identifiable by their green and white attire, gathered in the middle of the lower bowl in the closing minutes to chant, “J-E-T-S, Jets, Jets, Jets, Jets!”

Coach Matt Patricia and quarterback Matthew Stafford had little to say about the hometown unrest in the minutes after the game. Stafford, who had thrown four interceptions in the blowout loss, focused on his own frustrations.

“You know, whatever is going on out there is going on out there. It doesn’t change my demeanor or the way I approach the game,” Stafford said. “I can tell you, no one in that stadium was more frustrated than I was. I was making poor decisions and poor throws and that’s frustrating to me.”

Patricia, as he often does when he doesn’t want to answer a question, reverted to a string of cliches — a sentence or two about his team’s toughness, another about needing to get better, and finally making sure to credit the Jets for being the better team.

Maybe it was just easier not to acknowledge the unforgiving soundtrack in his head coaching debut.

But not all Lions players are burying their head in the sand. Wide receiver Golden Tate heard you, and while each round of boos stung, he gets it. He really gets it.

“It was tough,” Tate said. “The boos just got louder and the Jets fan base just got louder. To be at home and for that to be the case, it definitely hurts. I can’t say we didn’t deserve it. We didn’t put a great product out there.

The Lions' history is ugly. The team last won a championship in 1957 and have just one playoff victory in the six decades since. This season marks 25 years since the last division crown. It’s a staggering level of ineptitude.

Tate isn’t responsible for the team’s history. No one on the current roster or coaching staff is culpable beyond the years they've been here.

All things considered, Tate has been a success story for the franchise. In his first four seasons, the team had a winning record three years, including two playoff berths. Individually, he's caught at least 90 passes each of those four seasons.

But his willingness to understand the fan base's deep-rooted pain, acknowledge it and empathize with it is admirable.

Monday’s wounds are still fresh. Getting embarrassed at home, on national television, by a rookie quarterback, that sting doesn’t go away overnight. But the Lions don’t have time to lick their wounds. They have to move on, and do so quickly.

“We’ve got 15 more opportunities, at least, to go out there and paint this picture,” Tate said. “And I have no doubt, with the competitors that we have that we’re going to get this fixed.”

This week’s turnaround has been accelerated, in part because the team played on Monday night and because they have to travel to the West Coast for a Week 2 matchup with the San Francisco 49ers.

Although his experience as a head coach is limited to the small sample size of the past eight months, Patricia likes the way the roster has responded.

“Obviously the final evaluation is always on Sunday, but I would say over the course of the week, as a coach, I think these guys have done a great job,” Patricia said. “They’re a mentally tough group now. This group is a tough group. They push through, they grind it out.”

And while home is where the heart is, Tate is grateful the team is heading out on the road this week. Not because the fans booed the Lions out of their building, but because he believes a change in scenery might be what the doctor ordered.

“Personally, I can’t speak for everyone in the locker room, I’m glad we’re hitting the road, having a chance at a different scenery, a different environment, to get this taste out of our mouth,” Tate said.

And if the Lions can pull off the victory in San Francisco, it can recharge everyone, from the players to the disgruntled fans.

“Personally, it’s been tough because we showed up in April and put a lot of work in, a lot of hours in, a lot of expectations. And the first opportunity you get, to do that, it hurts” Tate said. “Like I said, it’s a new week, it’s a new opportunity. Our time, on Sunday, we have a chance to write this story a little bit differently.

Records: Both teams are 0-1