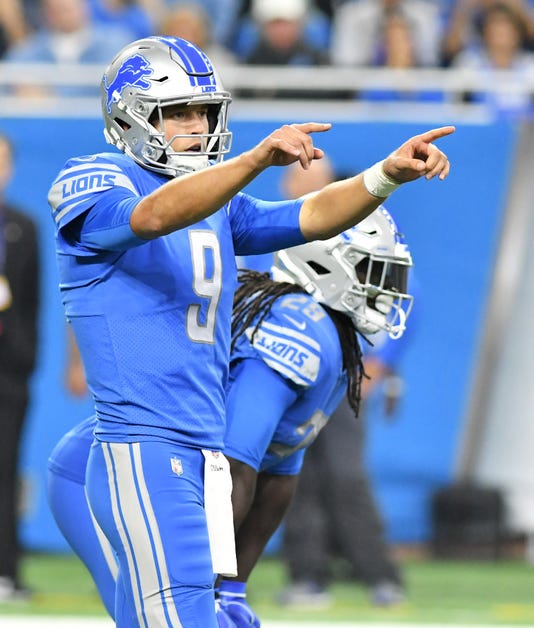 QB Matthew Stafford will be looking to bounce back from a horrendous outing against the Jets when he threw four interceptions.(Photo: Robin Buckson, Detroit News)

Few short weeks have ever felt so long.

This week couldn’t end soon enough for the Lions heading into Sunday’s game at San Francisco as the taste of Monday’s horrific 48-17 season-opening loss against the New York Jets polluted the entire week throughout Michigan.

Awaiting Detroit in the Bay Area is San Francisco — another 0-1 team, but one without a national embarrassment to shake off, just a much-needed win in its sights.

1. Signs of life? Nothing else matters unless the Lions clean up at least a handful of the issues that plagued Monday's game. Coach Matt Patricia already faced a crucial potential season-saving week of practice before summer officially ended in his first season. How the Lions respond will be telling, as an 0-2 start can be turned around in a long season. But another performance anything like Monday’s debacle likely indicates this team is headed toward a Matt Millen-era type of season.

2. QB recovery: Matthew Stafford was among the worst of the Lions on Monday, and the 10-year veteran has to be better after throwing four interceptions. However, San Francisco’s Jimmy Garoppolo threw three interceptions in the opener too, and has something to prove after the first loss of his career. However, Jimmy G was intercepted on the road against what’s probably the league’s best defense in Minnesota, so there’s no need to panic yet there. Stafford has dealt with the swings of a long season before, and Garoppolo has not yet.

3. Strength vs. weakness: The 49ers are a team short on proven playmakers around Garoppolo, especially at wide receiver, and he relies heavily on tight end George Kittle as a security blanket. Kittle was targeted nine times in the Minnesota game - three more than any other pass catcher. That means the pressure will be on Lions linebacker Jarrad Davis, whose coverage struggles continued against the Jets.

4. Revenge game? Lions linebacker Eli Harold played just nine snaps and had one tackle for his new team in Week 1, but will have extra motivation against the 49ers, who traded him during training came after he spent his first three seasons there. “It’s marked,” Harold said about this game, shortly after arriving in Detroit following the Aug. 23 trade. “It’s definitely marked.” The Lions had two sacks and three tackles for a loss against the Jets but have an opportunity to rattle a young quarterback once again, something they were unable to do to Sam Darnold after intercepting the Jets rookie on the first play of the game.

5. Defeated demeanor? Patricia looked like he was seeing a ghost for much of Monday’s opener — you’re not in New England anymore, Coach. He seemed to be disengaged from the rest of the sidelines, but there’s no playbook for being a national laughingstock in your debut. The gear — pencil resting on the ear above the trademark beard, the backwards hat and oversized pullover —isn’t likely to change. But we’ll see if Patricia’s demeanor changes as the heat gets turned up Sunday.

Matt Schoch is a freelance writer