The Lions' matchup with the Patriots brings quarterback Tom Brady and tight end Rob Gronkowski, one of the NFL's most feared combinations. 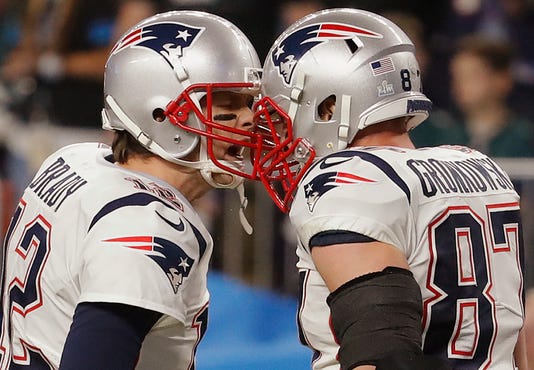 Allen Park — The Detroit Lions' matchup Sunday night with the New England Patriots brings the tandem of quarterback Tom Brady and tight end Rob Gronkowski, one of the NFL's most feared combinations.

Though the Lions haven’t had many matchups against Brady in the regular season, safety Glover Quin recalls last season’s preseason game, when the Patriots scored the first 24 points, en route to a 30-28 victory.

Brady had 174 yards and two touchdowns in the first half, but the more memorable piece was Quin snagging an interception off the former Michigan quarterback.

“He threw me one last year and I really appreciate it,” Quin joked.

It’s the only pick that Quin can recall making during the preseason in his career. Still, it stands out.

Gronkowski had just one catch in that game, but Quin and the secondary still regard the 6-foot-7 target as the dangerous offensive weapon that he’s been for years now.

“We have to all recognize where he is and tuned in to what we’re doing. Superstar players are going to get (theirs), but last week, he had two catches, Quin said. “They don’t go off every game, but they go off a lot of them. They demand a lot of attention, but you have to know where he is and keep that in mind.”

At safety, Quin could have some run-ins with Gronkowski, who continues to be Brady’s favorite target — and that could be complicated by the addition of wide receiver Josh Gordon this week.

Gronkowski did appear on the Patriots' injury report Thursday with an ankle injury. He was "limited" in practice.

“(Gronkowski’s) been with Tom for a lot of years, so they have a good rapport on the field; they play really well together,” Quin said. “He’s big, physical and he’s faster than people think. He runs kinda weird, but he moves fast. He’s not really shifty but you don’t have to be when you’re that big.”