The Lions went heavy on defensive backs in the victory. See how that rotation shook out and more.

The Lions didn't just beat the Patriots, they dominated one of the league's best teams, giving Matt Patricia his first win as head coach. The Detroit News 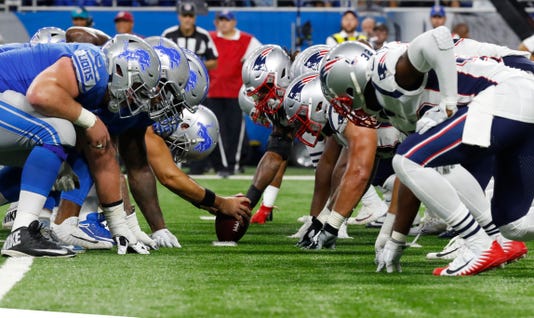 Allen Park — The Detroit Lions went into Sunday night's game against the New England Patriots light on defensive linemen and heavy on defensive backs.The strategy paid off as the defense frustrated quarterback Tom Brady and the Patriots' offense in the 26-10 victory.

Here are some observations from Sunday's snap count report.

►It was nice to see all five members of the starting offensive line play all 74 snaps. The team has really battled durability issues up front the past couple of years, and when the starting five is on the field, you see the unit's potential.

In general, the Lions escaped this game unscathed. There wasn't a single reported injury.

►The defense had six ironmen, although 48 snaps is a fairly small workload. It's worth noting safety Glover Quin has played 100 percent of the defensive snaps each of the past two weeks, after surprisingly rotating off the field several times in the season-opener.

More: Wojo: Patricia's plan gets a boost in Lions' stunning rout of Pats

►Filling in for Ziggy Ansah, defensive end Romeo Okwara took 83 percent of the reps. The September waiver claim, who was understandably a healthy scratch his first week in Detroit, has been a quick study picking up the scheme.

►As Quandre Diggs transitions into a role that doesn't require him to leave the field, and Quin moves back to playing every snap, Tavon Wilson is seeing his playing time slowly decrease. He played a season-low 46 percent of defensive snaps Sunday. It also probably doesn't help that rookie Tracy Walker's playing time has inched up each week.

►This is probably close to an ideal balance for the team's running back usage. Rookie Kerryon Johnson led the way with 33 snaps, followed by LeGarrette Blount's 26 and Theo Riddick's 21.

Johnson was electric in the victory, but his frame and injury history suggests you want to avoid overworking him to maximize his impact over the course of a full 16-game schedule. Barring injury, expect him to top out around 20 touches/targets each week.

More: Niyo: Johnson throws Lions the party of the century

►Teez Tabor, a second-round draft pick in 2017, once again was limited to special teams action. That means, for this week at least, he was behind the recently re-signed DeShawn Shead on the game plan depth chart. Shead got the call for 13 snaps.

►With Michael Roberts out after suffering a knee injury in practice last week, tight end Levine Toilolo nearly doubled his season-high workload with 37 snaps. He only played that many twice last season with the Falcons. He didn't catch any passes in the win, but he played a key role as a run blocker.