Lions' Ameer Abdullah doesn't let demotion get him down

Ameer Abdullah has taken his demotion in stride, and his coaches and teammates have continued to praise his attitude and effort on the practice field.

Lions' Ameer Abdullah doesn't let demotion get him down 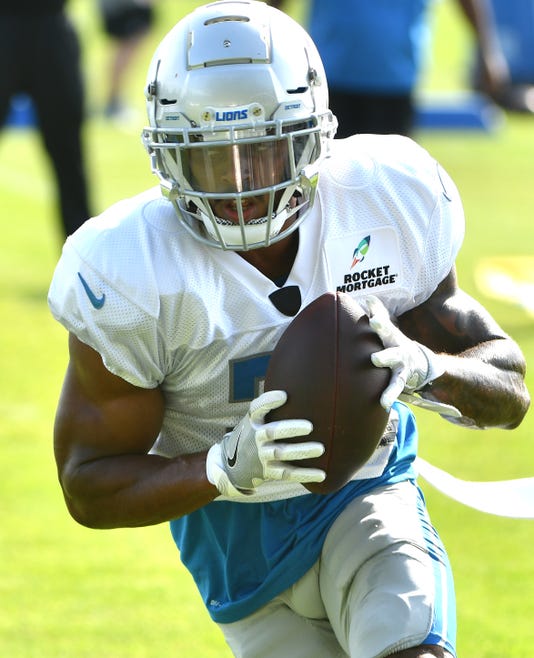 Lions running back Ameer Abdullah has been inactive for the first three games of the season, buried behind veterans LeGarrette Blount and Theo Riddick, and rookie Kerryon Johnson on the depth chart.(Photo: Daniel Mears, Detroit News)

Allen Park — Kerryon Johnson is the toast of town.

After building up momentum throughout the offseason, the Detroit Lions rookie running back broke through for 101 yards Sunday against the New England Patriots, snapping the team’s 70-game drought without a century-topping rusher.

But before Johnson, the Lions had pinned their hopes of a consistent running game on another second-round pick, Ameer Abdullah. And much like Johnson, Abdullah had fans buzzing with his early performance.

On his first NFL carry, in 2015, he sliced up the gut against the Chargers, got into the second level, and made a move on Eric Weddle that made it look like the All-Pro safety was wearing cement shoes instead of cleats.

Touchdown, 24 yards, the Abdullah era was under way.

Splitting time with veteran starter Joique Bell, Abdullah finished his rookie year with nearly 600 yards. He had some hiccups with ball security, but was poised for breakout in his second season. And he made good on those expectations with a strong opener and an impressive start to Week 2. He was averaging 5.6 yards per carry when disaster struck, a broken foot that prematurely ended his year.

From there, things were never the same. Named the starter months before the 2017 season, Abdullah labored through 3.3 yards per attempt on a career-high 165 carries. He still flashed big-play explosiveness, and he nearly ended the team’s 100-yard drought a year earlier with 94 yards against the Vikings, but inconsistent blocking behind an injury-riddled offensive line required him to avoid tacklers in the backfield at an alarming rate.

Now, Abdullah is the forgotten man. The old toy, replaced by the shiny new one on Christmas day. The former starter has been inactive for the first three games, a healthy scratch each week, with no immediate improvement to his situation in sight.

While a dozen or so reporters crowded around Johnson during Wednesday's locker room availability, Abdullah almost slipped out the back door unnoticed.

The mentally strong Abdullah has taken his demotion in stride and his coaches and teammates have continued to praise his attitude and effort on the practice field. As he watched Johnson run through massive holes created by the offensive line Sunday, Abdullah wasn’t thinking, “Where were those when I was taking the handoff?”

“You know what, man? Not really,” Abdullah said. “I’m just not really built like that. I feel what’s for me is for me. What’s going to be is what’s going to happen for me in the future. I see how hard Kerryon and LeGarrette work in practice, and I just try to keep those guys going. Every week is not going to be like that, and just letting them know every time they go out there and give their all at practice, it’s enough.

“To see him go out there and have such a great game, to see him get his confidence, it feels so good,” Abdullah said. “Me and Kerryon, we have a connection, we’re both from Alabama. We kind of understand each other.”

Every week, Abdullah prepares the same. He gives everything he has each practice and his mindset on Sunday, despite what his practice reps may suggest, is he’s going to play. As he points out, you never know when a teammate might come down with an illness, or suffer an unexpected injury during warm-ups.

Abdullah is staying ready for when the team needs him again.

“I’m definitely not in the position I want to be right now, but like I said, what’s for me will be,” Abdullah said. “I still come here every day and work as hard as I can to do what I can when my number is called.”