The Lions got T.J. Lang back on the field for the first practice after the bye.

The Dolphins rank toward the bottom of the league in sacks, but Lions coach Matt Patricia said the team makes life uncomfortable for quarterbacks. The Detroit News 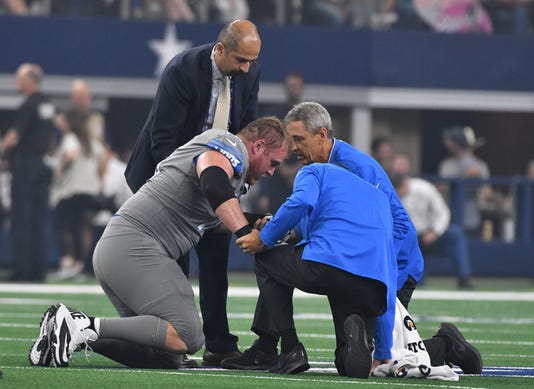 Lions offensive lineman T.J. Lang suffered a concussion in the game against the Cowboys.(Photo: Daniel Mears, The Detroit News)Buy Photo

Allen Park — An early bye week is undesired among NFL teams and players, but the timing of the  Lions' Week 5 bye might prove fortuitous.

The week of rest proved to be enough time for starting guard T.J. Lang to return to the practice field.

Lang is working his way through concussion protocol after suffering a head injury in a loss to the Cowboys this month. It is the sixth documented concussion of Lang's career.

"You always miss guys that are out of the lineup that have played a lot of football for you," Lions coach Matt Patricia said. "Those guys have a valuable experience that they see things that maybe they can communicate better or maybe they understand quicker."

Veteran Kenny Wiggins filled in for Lang and has struggled. In 64 pass-blocking snaps over the past two games, Wiggins allowed seven quarterback pressures, according to Pro Football Focus.

In addition to Lang's return, Michael Roberts was also back on the practice field for Detroit. The second-year tight end has missed the past three games with a knee injury.

The only player missing from Wednesday's session was running back Theo Riddick. He was listed as out with a knee injury. He briefly left the team's Week 2 against the 49ers with an ankle injury, but hasn't missed any practice time this season.