View from the other side: Lions at Dolphins

Armando Salguero is a columnist who covers the Dolphins for the Miami Herald. He breaks down the Lions’ upcoming opponent for The Detroit News.

View from the other side: Lions at Dolphins

Justin Rogers and John Niyo break down the Lions' upcoming matchup with the Dolphins. The Detroit News 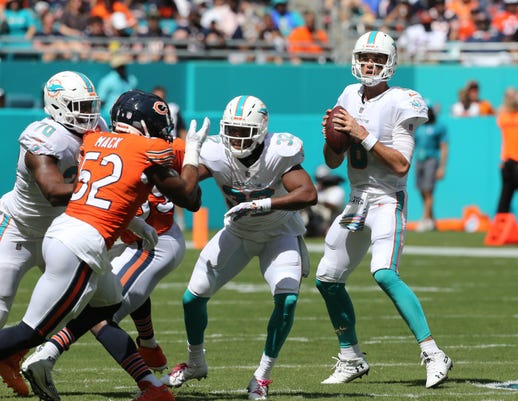 Brock Osweiler will be under center for the Dolphins against the Lions on Sunday.(Photo: David Santiago, TNS)

View from the other side

Armando Salguero is a columnist who covers the Dolphins for the Miami Herald. He breaks down the Lions’ upcoming opponent for The Detroit News, answering five questions heading into Sunday’s game. You can follow him on Twitter @ArmandoSalguero.

►Question: Cameron Wake's status remains up in the air, but he returned to practice this week after a two-week absence. Even as he nears his 37th birthday, how much of a difference does he make for this Dolphins defense?

►Answer: Cameron Wake remains the Dolphins' most dynamic pass rusher, whatever his age. When he's in the lineup the team feels it doesn't need to take as many gambles with blitzes to create pressure. Defensive coordinator Matt Burke is a Jim Schwartz disciple and wants to get to a point where the Dolphins create pass pressure with their four down linemen. That has not been possible without Wake. It is possible with Wake on the field. So it stands to reason, if Wake plays, the Lions will see fewer blitzes. If he does not play, expect more blitzes.

►Question: Like the Lions, the Dolphins don't have a true No. 1 receiver.  How does the skill sets of the current collective complement each other to generate the quality production the team has gotten thus far?

More: Lions' conditioning to be put to test in sweltering Miami heat

►Answer: With the exception of DeVante Parker, none of the Dolphins receivers are big or have a wide catch radius. But they are all very fast and explosive. That's why the Dolphins this year have two pass plays of 75 yards, another of 74 yards, another of 52 yards, another of 43 yards. The 75-yard touchdown pass Brock Osweiler completed to Albert Wilson against the Chicago Bears, was actually a four-yard pass, and a 72-yard run after catch. Parker, who has been inconsistent, is bigger, stronger, but also fast. His problem is he's been injury prone.

►Question: How is the defense picking off so many passes? Turnovers can be fluky, with drops and deflections, but to snag 11 through six games, after just nine in 2017, there has to be more to it than luck.

►Answer: It's more than luck. It's guys actually holding on to the passes, to begin with. Last year the Dolphins had numerous opportunities to intercept passes and they often dropped the ball. Kiko Alonso, who has two interceptions, is playing much better than a year ago. Xavien Howard is a very good cornerback and has grown tremendously in his third season. And there's this: Miami's opposing QBs, with the exception of Tom Brady and Andy Dalton, haven't exactly been stars.

►Question:It's not particularly relevant to this matchup, but we never got the opportunity to see Ndamukong Suh match up against the Lions as a member of the Dolphins, given his contract was cleared from the books this offseason. What is the legacy of the signing and his time in Miami?

►Answer: The Ndamukong Suh legacy in Miami is indeed the contract. It was hard to fathom signing a defensive tackle for $19 million per season in 2015. The Dolphins did it. And it didn't work out because, oddly, Suh never scored touchdowns, never changed the course of games, never really factored in the deciding of games although he played his position well. The Dolphins are carrying $9 million in dead money from that contract this year and will carry $13 million in dead money next year. That's the legacy.

►Question: The Dolphins win this game if?

►Prediction: Come on, man, I don't do score predictions. I do predict weather. it's going to be hot — especially on the Lions sideline, which is in the sun.

►Albert Wilson: The self-proclaimed best after the catch, Wilson is coming off a career-best performance against the Bears. The speedy option will be a tough cover for the Lions, especially in the slot, where the team just lost top nickelback, Jamal Agnew.

►Xavien Howard: A former second-round pick, Howard is quietly developing into one of the league's better young corners. He's unlikely to shadow a specific receiver, given Detroit's wealth of talent at the position, but he's not one to challenge with 50-50 balls. He's already come down with three interceptions this season.

►Frank Gore: Despite appearances, Gore won't play forever and this might be the last time Lions get a chance to see the legendary back, who is quickly closing in on Barry Sanders on the all-time rushing list. Don't let his age fool you, Gore can still go, as evident by his 101-yard performance against the Bears last Sunday.