Instead of forcing Miami into a second-and-17, Patricia left the Dolphins with a third-and-7 after declining a holding penalty.

Justin Rogers and John Niyo break down Detroit's 32-21 win in Miami on Sunday. The Detroit News 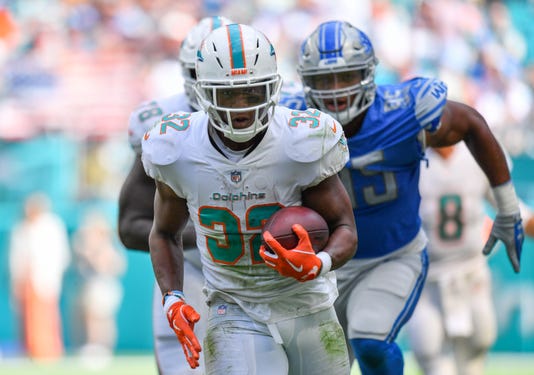 Kenyan Drake (32) of the Miami Dolphins runs for a touchdown in the third quarter.(Photo: Mark Brown, Getty Images)

Lions coach Matt Patricia made two judgment calls, both borderline decisions, and the Lions failed to execute in both situations.

Late in the third quarter, after the Lions scored a touchdown to go up 12, Patricia made the decision to go for two. The Lions handed off the ball to LeGarrette Blount on the play and he was stuffed well short of the goal line. After the game, Patricia called the decision “standard operation," implying he would do it the same way if faced with the same situation.

Earlier in the second half, Patricia made another judgment call, declining a holding call after an incompletion on second-and-7, opting to make Miami face third-and-7 instead of second-and-17.

The Dolphins converted with an 18-yard pass to tight end Mike Gesicki on the next snap and scored on a 54-yard Kenyan Drake touchdown two plays later.

Patricia was banking on his team’s stellar third-down defense, which has been particularly good in third-and-long situations, to make the stop.

“Just thought we were in good field position,” Patricia said. “We had a good call. We were playing all right at that point, as far as what they were doing, and just thought we wanted to stay in rhythm in the game. Sometimes it’s about how the guys are playing at that moment.

“Obviously, hindsight, wasn’t really good on that drive,” Patricia said. “They scored, so that’s not a great decision by me. But certainly, something that’s right on the edge of do we want to take the penalty or not take the penalty, and I thought in the moment that we were OK on the third-down play and try to keep the field position where it was.”

Regardless of the success and failure of these two plays, it offers some insight into Patricia's coaching style, leaning heavily on analytics, but also leaning on his gut based on what's happening the moment.