Nick Bellore’s supporting role in running back Kerryon Johnson’s Offensive Rookie of the Year campaign is growing in stature. 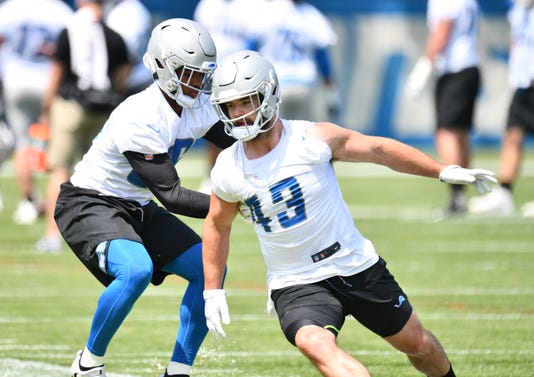 “I’m sure they were disappointed,” Cooter said last week, “All those 43 jerseys out there.”

But as fans clamor for more of the Lions new-found rushing success, maybe merchandisers should consider having some Bellore swag on hand.

Bellore’s supporting role in running back Kerryon Johnson’s Offensive Rookie of the Year campaign is growing in stature, as he played a season-high 14 offensive snaps in Sunday’s 32-21 win at Miami. Johnson’s 158 rushing yards led all NFL ball-carriers in Week 7 by 32 yards.

The former linebacker is even adding to his own highlight reel along the way: Bellore’s goal-line block helped LeGarrette Blount go in untouched for his 2-yard touchdown late in the first half.

More: Lions' showdown with Seattle 'just another game' for ex-Seahawks

More: Lions not satisfied with turnaround: 'We know we can play better'

“I’m not surprised because I’ve seen the guy really working behind the scenes in the meeting rooms, on the practice field, to get better at his craft and get better at playing fullback,” Cooter said Tuesday. “He is improving and along with him improving, that’s helping our offense.

“Nick’s going in the right direction.”

Bellore has four tackles this season on special teams and caught a pass for minus-5 yards, his third career catch. He also recovered a Blount fumble during the Week 3 win against New England.

“He does a great job every single day,” Lions coach Matt Patricia said. “He’s a tough guy, a smart guy and is able to transfer different positions.

“We appreciate and understand how hard he’s working to do the job that we’re asking him to do.”

Bellore, a Central Michigan product, was a three-time All-Mid-American Conference first-team selection at linebacker before he went undrafted in 2011.

He spent most of his first seven seasons with the New York Jets, San Francisco and Detroit at linebacker and on special teams. Last season, he started to see time in Cooter’s offensive backfield.

For Year 8, it’s been a full-time shift to fullback, although he’s still waiting on his first career carry.