Pass-rush pressure is a subjective stat, but every site measuring it agrees, the Lions have made big improvements this season.

Damon "Snacks" Harrison talks about getting acquainted with his new team, the Detroit Lions. The Detroit News 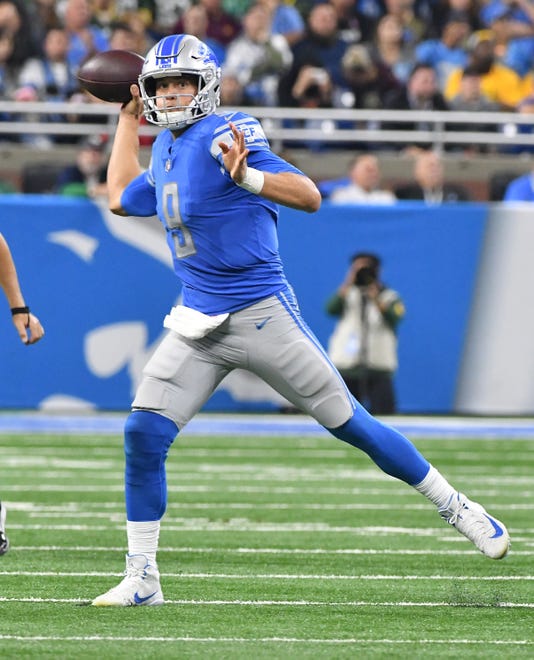 Allen Park — Pass-rush pressure is a subjective stat. In most cases you know it when you see it, when a quarterback is made uncomfortable by an oncoming defender, forced to move off his spot to deliver a throw.

There are a number of different entities that track pass-rush pressure, and their data is all slightly different, but one thing is clear, the Detroit Lions have made tremendous strides in keeping quarterback Matthew Stafford's pocket clean compared to a year ago.

According to ESPN, Stafford is facing the lowest rate of pass-rush pressure in the NFL. Football Outsiders has Detroit in the top 10 in their version of the metric, with a nearly six percent improvement from a year ago. And Pro Football Focus ranks the Lions eighth in total pressures allowed, incorporating sacks and hits, as well. In 2017, the team finished 28th in the same stat.

On Thursday, Stafford was asked if he could feel a tangible difference in the pocket.

"Yeah, absolutely," he said. "I think we’re doing a really good job. I think running the ball is going to help. I think we do a good job of getting the ball out quick, mixing up play-actions. I don’t think we hold the ball forever as an offense. I wouldn’t characterize us as that. But when we have dialed it up and tried to take some shots down the field, our guys have done a really nice job of blocking it up.”

More: Lions mailbag: Readers have an appetite for 'Snacks'

After delivering a clunker in the season opener, a four-interception outing in a losing effort against the New York Jets, Stafford has thrived with his improved protection. Over the past five games, he's completing 70.1 percent of his passes with 11 touchdowns, one interception and a quarterback rating of 112.8.

It also marks the first time in his career he's posted a quarterback rating over 100 in five straight games.

“That’s the quarterback’s best friend, being able to evaluate, get through reads, not having to throw the ball faster than you want to," Stafford said. "As a quarterback, the more time you have, the better. But at the same time, everybody has an internal clock and I don’t want to sit back there holding it forever.”

Stafford will look to stretch that career-best streak to six games this Sunday against the Seahawks.

It won't be easy. Opposing quarterbacks have had a 79.9 rating against the Seahawks, the third-lowest in the NFL. Not one QB has individually topped 100 in a game against them this season.