Kirk Cousins, who grew up in Holland and attended Michigan State, signed a three-year deal with Minnesota and is 4-3-1 as the Vikings’ starter.

Rogers and Wojo break down Detroit's decision to trade Golden Tate and the team's upcoming matchup with the Minnesota Vikings. The Detroit News 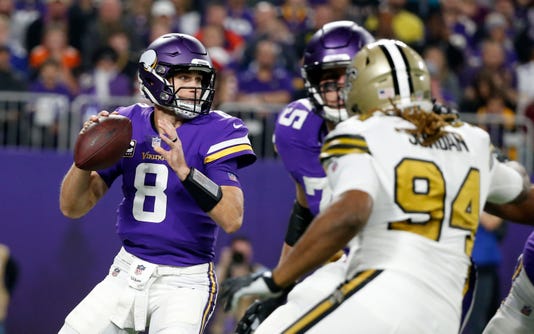 Allen Park — Through 70 career games, Kirk Cousins has only played his home state team once.

That will change starting Sunday as he now figures to be a long-term fixture for a divisional rival.

Cousins, who grew up in Holland and attended Michigan State, signed a three-year deal in the offseason with Minnesota and is 4-3-1 as the Vikings’ starter.

“All the things have been good with him.”

“I think part of it is Kirk throws the ball well and in a lot of good places, and Adam is extremely competitive trying to get open,” Zimmer said. “I just think Adam is a good player and he makes a bunch of catches, good catches, and he runs good routes.”

Cousins’ 16 touchdowns-to-four interceptions ratio is by far the best ratio of his career after starting 57 games over six seasons with Washington.

Cousins ran for a 19-yard go-ahead touchdown with 1:05 remaining before Stafford and the Lions drove 75 yards for a touchdown, finding Anquan Boldin for a 18-yard score with 22 seconds left.

Zimmer said he was pleased with Everson Griffen’s return Sunday to the lineup against New Orleans.

The defensive end, traditionally a terror for Stafford and the Lions, is back with the Vikings after missing five games with a mental health issue.

“Everson is always a guy that’s going to hit the ground running,” Zimmer said. “It’s different conditioning and running and lifting weights and all that stuff, and then you’re go out and you’re playing football. I’m sure there were some plays he’d like to have back and there were some good things as well.”

Zimmer said he was hopeful to get more guys back this week as preparations began later Wednesday.

“I think we’re going to get some guys back, hopefully,” he said. “It sounds more encouraging.”