Rogers and Wojo break down Detroit's decision to trade Golden Tate and the team's upcoming matchup with the Minnesota Vikings. The Detroit News 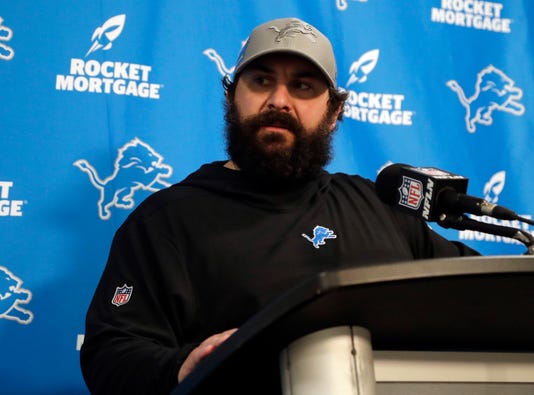 Addressing questions on the team's decision to trade wide receiver Golden Tate, Patricia was asked, “Why do you think this makes your franchise better?”

After a brief pause, Patricia pounced.

Sitting up straight, the reporter repeated his initial question, which netted a thoughtful response from the coach.

Patricia talks about the difficult decision to trade Tate and the balance of the franchise's immediate and long-term future. The Detroit News

“I think what’s important for us is when we evaluate everything that we do as a franchise," Patricia said. "I think there’s certain value that we can get at times during the season that will help us long term. And we obviously have faith and confidence in the people that are on this team right now. So, we put all that into play and try to make sure that we’re making the best decision we can in that moment.

"It’s hard," Patricia continued. "It’s very difficult when you’re kind of in that one-game-at-a-time mindset. That’s really where we are from a standpoint of, it’s week-to-week for us and that’s good. But there’s also a big picture here that it’s good for those to keep an eye on as we move forward and that’s something that we always have to consider when we make all these decisions, whether it’s during the season, during the offseason, free agency, draft, whatever it is. Those are difficult decisions no matter when they come up."