Justin Rogers and John Niyo discuss the Lions' three-game losing streak and the team's chances of snapping it at home against Carolina. The Detroit News 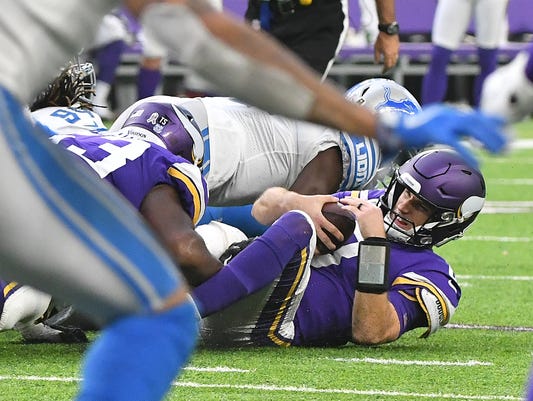 Sacks like this from linebacker Jarrad Davis have been few and far between in recent weeks for the Lions.(Photo: Daniel Mears, Detroit News)

Allen Park — It's Thursday, so let's knock out a Lions mailbag.

How often do the lions blitz? What is their success rate when blitzing? Seems like no pass rush but we never bring a bunch of guys. Could just be the way I watch. When dropping guys we still get burned, might as well bring them in to get the QB, no?

Here's what I know, thanks to the crack research team over at Pro Football Focus. The Lions are blitzing on 20.1 percent of passing downs. That's south of the league average, which is at 26.6 percent.

I don't have success rate broken out by blitzing and non-blitzing situations, but what's clear is the Lions aren't getting enough pressure of the passer. And for the last three weeks, they aren't covering either. Does it merit a shift in philosophy? I mean, it couldn't possibly get worse.

What is our needs for the draft? Top three, let’s say.

Just three? OK, as long as we all understand this team has far more than three needs. If I were to rank the top of the list, I'd go edge defender, cornerback and tight end. But that last one could just as easily be guard, linebacker or slot receiver.

This team desperately needs a defensive end who can consistently win as a pass-rusher. The defensive front is coming together from a run-stopping perspective, especially on the interior with A'Shawn Robinson and Damon Harrison, but opposing quarterbacks have too much time to deliver throws unmolested from pristine pockets. Detroit thought they had their guy in Ansah, at least for 2018, but injuries have continued to sandbag his impact.

At cornerback, the Lions have little reliability behind Darius Slay. I hate to give up on a guy like Teez Tabor this early in his career, and would be happy to be proven wrong, but what have we seen to suggest he's trending toward getting things on track? As for Nevin Lawson, he's OK, but lacks the ability to make plays on the ball.

Finally, the absence of a complete tight end, especially one who can stress defenses in the passing game, has been sorely missing this season. It shows up in the red zone, on third down and when opponents blitz.

More: Lions' Matt Patricia on Matthew Stafford: 'We're lucky to have him'

More: View from the other side: Lions vs. Panthers

Are you prepared for the “we gave up Tate for *insert name of D2 prospect we draft in the 3rd*?!” tweets next draft??

Those comments will be inevitable, but you traded Tate for a lottery ticket, and as a GM, you have to trust your scouting department and personal judgment on draft day. I'm not sure Bob Quinn could have netted a better return for an over-30 slot receiver in the final year of his contract.

Ugh. I hate myself.

I'm fairly certain self-loathing is a required trait to remain loyal to this franchise. 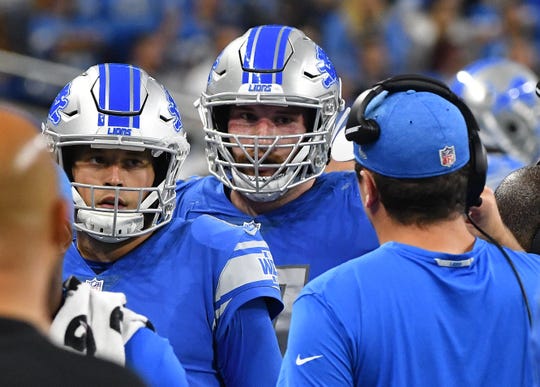 The second half of the season is vital for rookies such as guard Frank Ragnow (middle), who are developing in first-year head coach Matt Patricia's new scheme. (Photo: Daniel Mears, Detroit News)

Is there a way Detroit can finish this season and consider it a success? Perhaps it’s more about what they can establish for next season, so what specifically should they be aiming for?

Most coaches and players will tell you the previous year doesn't matter, but I disagree. There can be carryover into the next season, particularly for less experienced players or players working in new schemes.

The second half of the season will be valuable for rookies like Tracy Walker and Frank Ragnow, as well as veteran building blocks on defense, such as Quandre Diggs and Jarrad Davis, as they continue to get a feel for their roles within Patricia's system.

Would any of that constitute success? Probably not, at least not immediately, but it could translate to future success.

Should the Lions draft Stafford’s successor in this year's draft?

I'm not sure you ever shy away from drafting a quarterback if the value presents itself, but the only place you're likely to find a talent worthy of the successor label is in the first round. There's no reasonable way I could justify this franchise drafting a QB in the first round when they have a capable one in place and a half-dozen or more other issues to address.

Kyle Juszczyk seems to have carved a pretty unique role at FB with the 49ers and works pretty well in tandem with George Kittle. Do you think the Lions would go in that direction if they can find a dynamic athlete at FB to bolster both run blocking and the short passing game?

I have a great appreciation for the way Kyle Shanahan has utilized Juszczyk in San Francisco. His versatility was apparent coming out of Harvard, and it was a matter of a creative coach finding a way to deploy it.

Forgive me for not being well-versed in the fullback situation from this upcoming prospect class. It just hasn't been a priority. But sure, if they can find a Juszczyk-esque (say that 10 times fast) talent, why not? But you have to have a plan on how to use them.

Not in these exact terms, but I was discussing this the other day, and the easy conclusion to draw is Stafford has never had the opportunity to play under one of the game's brightest offensive minds.

As another person in the discussion pointed out, look at how Matt Ryan thrived when playing under Shanahan in Atlanta. Goff has Sean McVay, Wentz had Frank Reich and Mahomes and Trubisky are playing under Andy Reid and a Reid disciple, Matt Nagy. Those are some great offensive minds, although I'd say we're probably jumping the gun on the Bears' tandem.

I can't say for sure Jim Bob Cooter is done after this season, but if he is, Patricia will be tasked with finding someone bright or innovative. Or he could go safe, get another Syracuse or New England retread, and my initial point will stand three years from now. 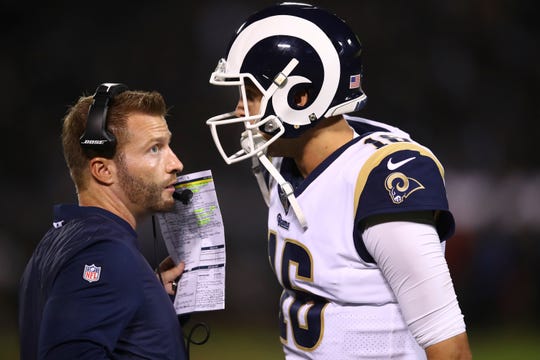 If the season continues to go down the drain which young players might see the field more as a result?

I mentioned him earlier, but I'd love to see more of Walker. I strongly suspect that Glover Quin won't be on this roster next season, so I want to see what Walker has to offer. The third-round pick has looked pretty good in his limited snaps this season.

You could make lesser arguments for wide receiver Brandon Powell and offensive tackle Tyrell Crosby. Michael Roberts and Jalen Reeves-Maybin also merit more playing time when healthy. But Walker tops the list by a wide margin, in my opinion.

Is Stafford actually as uninteresting and uncontroversial of a person as he appears in interviews or does he intentionally shy away from showing his personality?

It's definitely the latter. Stafford is actually pretty funny, but he absolutely buries his personality when the cameras and recorders are on.

I’ve made one mailbag this year so shooting for my 2nd (almost as many wins as the Lions). Would you rather listen to former Lions Chris Spielman or Dan Orlovsky discuss Lions football?

Both Spielman and Orlovsky offer excellent insights, but I'll lean Spielman for one reason: He offers a better balance of praise and criticism in his commentary.

Dan focuses on the positive, and that's fine. It matches his personality, but I want both sides in my commentary.

If the Lions did a chess tournament who would you consider the favorite and what odds would you lay him?

Got one about former Lion: Am I only one that thinks Ebron wouldn’t be doing with us what he is doing with Colts. Needed a change of scenery. I think the fans got to him mentally and he needed to get out.

Regardless, even if he wouldn't have been that kind of scoring machine for the Lions this season, he would have helped the offense with its overall ability to space out a defense and create mismatches. Not having him, without a suitable replacement, has hurt the team this year. 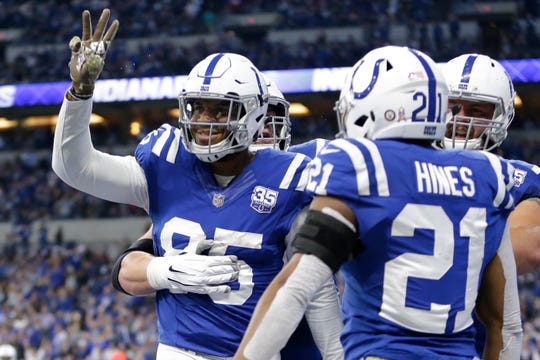 After several players are released, due to financial/performance issues, how much cap space do you project we end up with for next year?

I went though this the other day, just looking ahead, and if the Lions are aggressive about turning over the roster, they could have more than $75 million in cap space heading into free agency next season.

That said, they'd only be left with 26 players under contract in that scenario.

With TJ now on IR, do you think Crosby will get a look at RG? Who do YOU think should take that spot, and what will eventually happen?

I don't anticipate Crosby moving to guard this year. He's making nice progress at tackle and he's the first guy off the bench if Taylor Decker or Rick Wagner get hurt. Splitting his practice time at guard wouldn't be as effective for his development.

At this point, the Lions have committed to Kenny Wiggins and should just roll with it for the remainder of 2018, with a plan to address the spot in the offseason.

Any idea who is performing at halftime on Thanksgiving?

Where do babies come from?

My email inbox during and immediately after games on Sunday.

Glover Quin's play appears to have slipped noticeably this year. Is it age catching up, slow transition to new defense or a bad fit in new scheme?

I still have a difficult time believing Quin's age hit him like a ton of bricks this offseason. He was really good last season, even though the Lions shifted his role once Tavon Wilson got hurt. That's why I continue to blame the scheme adjustment more than age.

I got nothing really...feel sorry for Lang...will this stop Lions from signing free agents with injury history to big contacts?

Yeah, both Lang and Ansah should be learning moments for Quinn, when assessing how much he can count on players with lengthy injury histories. Nothing is guaranteed in football, but I'd rather sign the guy with a track record for durability than the one with a laundry list of issues dating back multiple years.

I liked the Hurons name, because it was unique, but since it was deemed offensive, the switch was the right move. But the Eagles? Come on, Eastern. That's the least creative mascot option you could have selected. Almost anything would have been better. The school should have went the minor league baseball route and picked something unique they could market.