It's happened before: Thanksgiving win could give Lions playoff hopes

A win Thursday in the annual Thanksgiving game against NFC North-leading Chicago (7-3) could push open the door another inch toward a late-season push that would make Wayne Fontes proud.

It's happened before: Thanksgiving win could give Lions playoff hopes

Rogers and Niyo break down the Lions' upcoming game against the Bears, as well as Monday's wild shootout between Kansas City and Los Angeles. The Detroit News 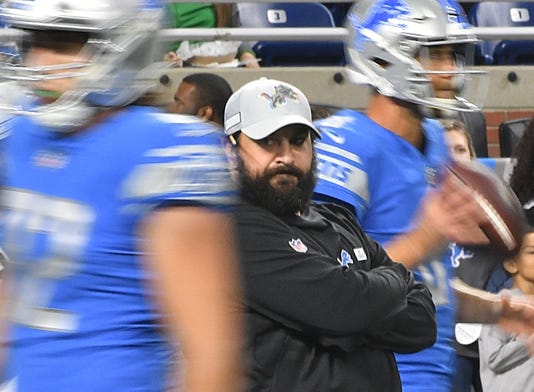 An unexpected 20-19 win Sunday against Carolina means, mathematically, the Lions still have potential for a playoff push.

And looking around at other shaky NFC playoff contenders, there’s enough evidence for Lions’ fans to once again play Charlie Brown in a familiar holiday scene.

But will Lucy — at 4-6 — even give fans the chance to swing wildly at playoff football dreams?

A win Thursday in the annual Thanksgiving game against NFC North-leading Chicago (7-3) could push open the door another inch toward a late-season push that would make Wayne Fontes proud.

“I’m just looking forward to the energy and excitement of the game itself,” Lions coach Matt Patricia said Tuesday. “I know it’s a great event obviously for this city, and I hope everyone’s families and everyone that can enjoy it gets to enjoy it. I’m going to try to stay locked in on the Bears and hopefully try to make everyone’s day happy.”

More: Can Lions’ LeGarrette Blount have another ‘legendary’ Thanksgiving?

Patricia and Bears coach Matt Nagy both said, like many of the rest of us, they’ve spent time thinking about leftovers this week.

Since the teams played Nov. 11 in Chicago, a dominant 34-22 win against the Bears that got sideways quickly on Detroit, there are plays and ideas that didn’t get used after that one got out of hand.

“It helps both teams, the fact that you just played,” Nagy said. “Whatever your game plan is, you prepped ahead of time, and you had stuff that you didn’t use that you liked and vice versa, I think that’s the cat and mouse game between the coaching staffs.”

Patricia said that kind of thinking is more beneficial for Nagy’s offense and not his defense. He declined to speak about how it might impact coordinator Jim Bob Cooter’s look for Detroit’s offense.

In addition to the Lions, three other flawed would-be NFC playoff contenders will be in action.

Dallas (5-5) and Washington (6-4, but starting Colt McCoy with starting QB Alex Smith out for the season) will play for the inside track of the NFC East, a division that looks unlikely won’t land a wild-card spot.

In the late game, a loss to red-hot New Orleans could sink Atlanta’s season to 4-7, pushing another team close to the brink.

Meanwhile, the Lions are a franchise that recently declared that 9-7 seasons are no longer acceptable in Allen Park. While that record should get to the postseason this year, does Patricia have much of a shot of getting there in his first season?

Let’s take a look at the numbers:

The conference’s sixth and final seed is currently Minnesota, a 5-4-1 team just a game-and-a-half ahead of Detroit with a trip to Ford Field coming the day before Christmas Eve.

At 4-6, the margin for error is slim for the Lions, who passed the first test in the tightrope walk Sunday against Carolina.

Going from 3-6 to the playoffs has been done before in Lions’ history.

Fontes finished the season with seven straight wins to go 10-6 in 1995, before a 58-37 rout against Rodney Peete and the Philadelphia Eagles ended the run. Fontes previously had turned a 2-4 start into a playoff berth in 1994.

After the Bears, this year’s Lions still have meetings with the juggernaut Rams on Dec. 2, winnable road games in Arizona and Buffalo, and then close with division games: the Vikings, then Aaron Rodgers at Lambeau Field on Dec. 30 to wrap the season.

“I’m not saying it’s not daunting,” safety Glover Quin said last week, even before the Carolina win. “Who says it can’t happen? Like I said, at the end of the day, we got to prepare and we are the ones that got to go out and do it.”