Justin Rogers, John Niyo and Bob Wojnowski of The Detroit News offer their predictions on the outcome of Thursday’s Lions vs. Bears game.

Rogers and Niyo break down the Lions' upcoming game against the Bears, as well as Monday's wild shootout between Kansas City and Los Angeles. The Detroit News 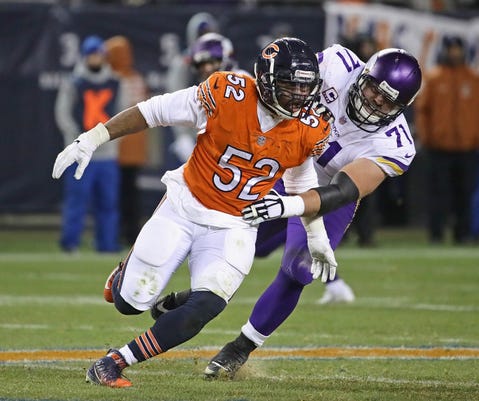 Justin Rogers, John Niyo and Bob Wojnowski of The Detroit News offer their predictions on the outcome of Thursday’s Lions vs. Bears game at Ford Field (12:30 p.m., CBS/760).

Justin Rogers: Mitch Trubisky is out and Darius Slay should play, so it's unlikely we'll see a repeat of the previous meeting, when Chicago jumped out to a 26-0 lead. But Detroit will be down two key cogs on offense, with no Kerryon Johnson or Marvin Jones, so it's difficult to determine how they'll move the ball against one of the league's stingiest defenses. Bears, 17-14

John Niyo: The Lions won't have Mitch Trubisky to chase around. But Matthew Stafford still has to worry about Khalil Mack and the rest of that Bears defense. Points may be hard to come by for either team, as a result. And the absence of Kerryon Johnson really hurts the Lions' ability to create manageable third-down situations. Bears, 20-17

Bob Wojnowski: The Lions are getting some breaks, with the Bears expected to start backup QB Chase Daniel for the injured Mitch Trubisky. Problem is, the Lions are missing their best runner (Kerryon Johnson) and arguably best receiver (Marvin Jones) against one of the NFL’s top defenses. Unless Matthew Stafford and Kenny Golladay connect for about three touchdowns, Chicago will sweep the series. Bears, 24-16

Can Lions’ LeGarrette Blount have another ‘legendary’ Thanksgiving?

Lions mailbag: Can Zach Zenner pick up the slack?