Receiver who was signed from Houston believes he can be reliable No. 2 receiver to Kenny Golladay. 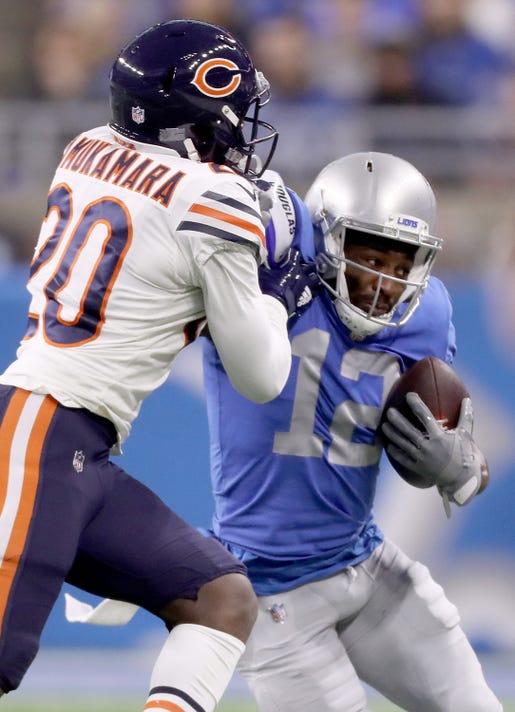 “The quicker I can learn, the more I can get out there,” Ellington said. “I come in early, meet with coach, so I’m doing every that I can to learn the playbook.”

Monday’s news of wide receiver Marvin Jones being placed on injured reserve for the remainder of the season further heightens the need for a reliable No. 2 receiver to pair with second-year star Kenny Golladay.

More: Lions' Patricia declines to say he needs more out of Stafford

On Sunday, Ellington and the rest of the Lions’ receiving corps will be hit with a tall order when lining up against the Los Angeles Rams: Making sure Stafford has a place to throw the ball when interior rushers the likes of Aaron Donald and Ndamukong Suh start closing down the pocket.

“It’s a great defense,” Ellignton said. “I’m a slot guy, I gotta get open pretty quick anyway. I just gotta do what I do, and I think our O-line can get enough on them.”

Of course, it’s not just Donald and Suh that the Lions will be worried about. Five-time Pro Bowl cornerback Aqib Talib was activated Monday from injured reserve for an ankle injury suffered on Sept. 23.

“As far as getting the ball out, getting interceptions, making tackles,” Ellington said, “(Talib is) just another playmaker that can disrupt the offense… we just gotta step up and make plays.”

Ellington has suited up twice for Detroit and pulled in six catches in each contest, a 20-19 win over the Carolina Panthers and Thursday’s 23-16 loss to the Chicago Bears. He’s averaging 40 yards, and it’s expected he’ll take on a larger role once he finds his rhythm with quarterback Matthew Stafford.

Lions head coach Matt Patricia said that he’s been impressed with the quickness to which Ellington has “made the most of his opportunity and produced.”

“He’s still obviously learning a lot about our offense and a lot about what we do, so it’s still a little bit new to him, but we expect that to continue to grow and hopefully we can keep getting the production that we’ve seen.”

Ellington spent three seasons with the San Francisco 49ers, a season on the New York Jets’ practice squad, and played three games with the Texans this season.

He had no prior connections to Detroit, he said, and that the team “pretty much took a chance” on him.

“I’m kind of happy and proud of that,” Ellington said.

Nolan Bianchi is a freelance writer