Ndamukong Suh signed a mega-contract in 2015 and left behind a Detroit Lions team that didn’t have much success with Suh, and has had even less since.

Justin Rogers and John Niyo discuss the Lions' upcoming game against the Rams and the depressing nature of covering meaningless football in December. The Detroit News 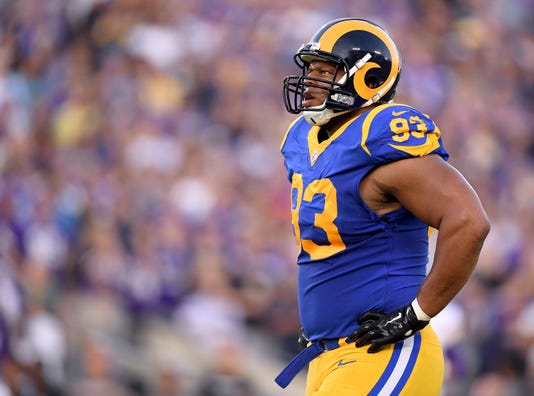 Thousand Oaks, Calif. — Ndamukong Suh signed a mega-contract in 2015 and left behind a Detroit Lions team that didn’t have much success with Suh, and has had even less since. Now it’s time for a reunion.

Suh spent his first five seasons with the Lions and developed his reputation (in ways good and bad) as one of the NFL’s fiercest defensive tackles. After a three-year layover in Miami, Suh now is chasing a Super Bowl with the Rams, and on Sunday he will return to Detroit for the first time since his departure.

There’s no need to manufacture drama. Suh’s decision to leave Detroit, after the expiration of his rookie contract, made sense, given that the Dolphins put a $114-million contract in front of him. There didn’t seem to be any angst on the way out the door, but apparently Suh didn’t leave with great feelings.

Suh appeared to take a subtle jab at Lions quarterback Matthew Stafford in a video posted on the Rams' Twitter account. Asked about the quarterbacks he's played with, Suh singled out Rams quarterback Jared Goff and former Bears and Dolphins quarterback Jay Cutler has his favorites.

Cutler and Suh were teammates in Miami in 2017.

In an Instagram post earlier this year, Suh raved about Rams quarterback Jared Goff, calling him the best quarterback with which he's played. He was asked to elaborate on that this week.

"It's a great quarterback in Jared; I loved him," Suh said. "I'll tell you another guy that I enjoyed being around was Jay Cutler. Obviously playing against him in the Black and Blue Division up there in Detroit, and getting to know him down in Miami ... he's a great dude. I enjoy the quarterbacks I've been around, but those two the most."

.@NdamukongSuh on his 2018 play, lining up with Aaron Donald + going back to Detroit. pic.twitter.com/Ag4xGokYq7

Asked about looking forward to facing Stafford, Suh said, "It's just another quarterback in our Rams way of getting to where we want to go."

The nature of Suh’s seemingly poor feelings about the Lions isn’t known. At the least, this week is another chapter in the story of a team and a player in search of playoff fulfillment.

The Lions’ tale is easy to tell, because they’re basically exactly where Suh left them, still in search of their first playoff win since 1991. It’s not going to happen this year, because the Lions are 4-7, and they’ve lost three of their last four games in large part because of a wayward offense.

That could be good news for a Rams defense that just utilized a bye week to catch its breath after a 105-point game against Kansas City. The Rams can clinch the NFC West with a victory Sunday, and that would give Suh another opportunity to record the first playoff victory of his nine-year career.

More: Rams' dominant defensive front a vision of what might have been for Lions

“I think he’s done a really nice job,” Rams coach Sean McVay said. “I think the thing that has been impressive is the versatility that he displays. You don’t often see guys that have been dominant interior rushers and dominant interior players have the ability to seamlessly transition to do a variety of different things.”

Suh certainly is one of his generation’s top defensive linemen – he’s been selected to Pro Bowl and All-Pro teams five times – but he’s been unable to taste team success. The Rams’ pending division title will be his first, and his teams are 0-3 in playoff games.

Suh’s legacy in Detroit includes a lot of sacks and a lot of dollars in fines, but some emptiness. The Lions went 10-6 in his second season but then 11-21 in the next two seasons. Suh walked after the 2014, when the Dolphins signed him to what was – until Aaron Donald’s Rams deal – the largest contract for a defensive player in league history. Brighter times seemed ahead for Suh and his team.

Instead, Suh had 15.5 sacks in 48 games with the Dolphins, who went 22-26 before they released Suh in March with three years left on that massive contract. Suh then signed a one-year deal with the Rams.

Suh’s 11-game stint with the Rams has been even more difficult to judge. It seems reasonable to say that Suh has not, as many expected, formed an unblockable duo with Aaron Donald. Donald has been unstoppable, with 14.5 sacks, while Suh has 3.5 sacks and 34 tackles.

“I would say I’ve played well,” Suh said. “I’ve done a lot of things, played a lot of positions. One thing I pride myself on is being able to play any position on the defensive line. If they need me to play linebacker, I’d be happy to do so. We’re winning games, so that’s the most important thing.” 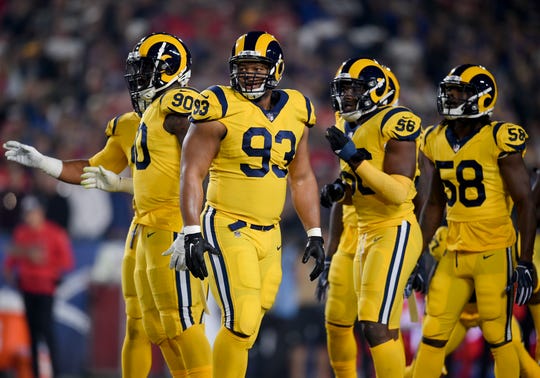 Suh, in his first season as a nose tackle in a 3-4 system, certainly has gobbled up time and space and occupied blockers, which has allowed Donald room to move. But Suh’s individual impact plays haven’t been numerous.

“There’s a lot of situations where a player of (Suh’s) presence has helped dictate some things that get you in some favorable spots,” McVay said. “Both those guys (Suh and Donald) have done great things, not only this year but throughout their careers.”

Rams opponents have rushed for 5.2 yards per carry, the second-highest average in the league this season. It’s difficult to assign responsibility for that, just as it is tough to tie any team’s (or teams’) lack of playoff success to one player. Lions coach Matt Patricia, who saw Suh twice a year when he played in Miami and Patricia was New England’s defensive coordinator, remains impressed.

“He presents a lot of problems,” Patricia said. “He’s got great size, great length, a great ability to play the run and pass. He’s got good quickness and tremendous power. He’s one of those impact-type players that can play multiple positions inside. He can be on the center, he can be on the guard and he can put himself outside on the tackle and have that flexibility to put himself in multiple positions to make a play.”