The play that fans will remember most in Tracy Walker’s rookie season didn’t count. But his performance should mean he will have chances to make more. 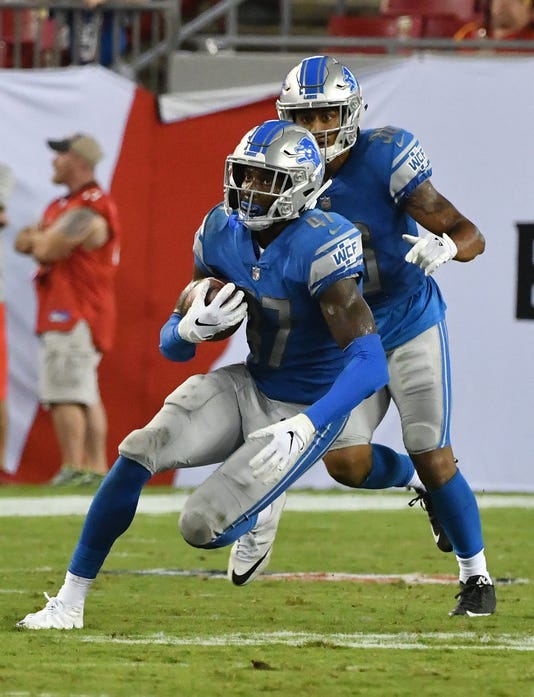 Tracy Walker’s snap counts are building up as the Lions (5-8) head to the season’s finish line.(Photo: Daniel Mears, Detroit News)

But the performance of the safety and third-round pick should give him the opportunity to make more.

“I’ve played pretty well. I feel like there’s a lot of improvement I still have to make, but at the end of the day, you just build on every week,” Walker said.

Walker’s snap counts are building up as the Lions (5-8) head to the season’s finish line.

On Sunday, Walker’s season-high 43 snaps were identical to those of veteran safety Glover Quin, who could be a salary cap casualty this offseason. It was the first time this season Walker played over half the Lions defensive snaps at 61.4 percent.

Defensive backs coach Brian Stewart said much of that is dictated by the opponent’s offensive scheme. Serving as the “sub safety,” Walker is the sixth defensive back in dime packages.

With the Lions defense forcing a season-high 16 third downs and Arizona putting quarterback Josh Rosen in several 2-minute offense situations, the time was right for Walker, just like it appeared to be against another lowly NFC West foe this season.

In Week 2, Walker stepped in front of a Jimmy Garoppolo pass at San Francisco, taking it deep into 49ers territory to put the offense in position to take the lead or tie with a field goal late in the fourth quarter.

However, the play was called back on a Quandre Diggs holding penalty away from the pass that replays showed was of the ticky-tack variety. The call sealed the loss and an 0-2 start for a season that would look a lot different right now with one more win.

Walker got his first official interception in a 20-19 win against Carolina in Week 11.

There, he stepped up to a Cam Newton deep pass and wrestled the ball away from wide receiver Curtis Samuel to keep the Panthers off the board late in the first half.

The Louisiana-Lafayette product helped bottle up the Arizona passing attack Sunday, keeping the Cardinals out of the end zone in a 17-3 win. Pro Football Focus rated him as the fourth-best Lions’ defensive player in the victory.

More: Lions' Taylor Decker tweets that he got his football back

More: View from the other side: Lions at Bills

At 6-foot-1, 206 pounds with a 6-10 wingspan, Walker said he was expecting to get picked in the fifth round before the Lions took a chance on him.

“He has a nice wingspan as a safety, so it’s hard to overthrow him if he has a good jump on the ball,” Stewart said. “He has good ball skills, that also helps. It’s good to have a guy that size.”

Walker is one of two rookies getting a chance late this season as offensive lineman Tyrell Crosby played a season-high 35 offensive snaps after right tackle Rick Wagner suffered a concussion on Sunday. Crosby, a fifth-round pick of Oregon, entered the game with 20 offensive snaps under his belt.

The pair has a chance to join guard Frank Ragnow, running back Kerryon Johnson and defensive tackle Da’Shawn Hand as draft picks who have proved their worth this season, figuring into Detroit's plans. Seventh-round pick Nick Bawden, a fullback, has been on injured reserve all season with an ACL tear in his knee.

“I feel like I’ve just developed as a man on and off the field,” Walker said. “I feel like my mental state has grown and I’ve learned a lot since I’ve been here.

“We’ll be here all night if I sat here and named, in detail, everything (I’ve learned). It’s just the fact that you’ve got to be a professional when you step up in the building and understand that it’s a job and it’s a business. That’s pretty much it. You’ve still got to enjoy football, but at the end of the day, you got to come to work.”